My Goal in 2018 Was Not Clinging to Power. My Goal Was to Protect Artsakh, and By Extension – Also Armenia: Serzh Sargsyan 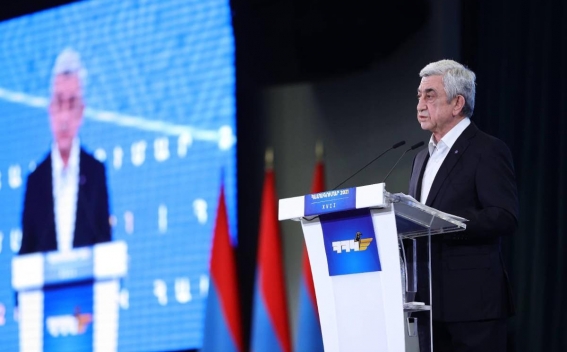 Armenia’s third President and Chairman of the Republican Party of Armenia (RPA) Serzh Sargsyan delivered remarks at the 17th RPA Congress on Saturday.

"Our government was standing in the way of all those, whose thinking about Artsakh and the future of Armenia did not match with ours. We did not belong to anyone, we were native and pursued our own national interests – something not in tune with their aspirations. My goal in 2018 was not clinging to power. My goal was to protect Artsakh, and by extension – also Armenia. I was nominated for the position of the Prime Minister only and purely to further strenghten our already strong negotiating positions in the peace process and try to avert the tragedy we are living through today. Wasn’t it clear enough that unfavorable resolution of the Artsakh issue would cost dearly on Armenia too? I was convinced in that and pursuing exactly that, whereas I was accused of desiring to remain in power forever, and did everything possible to remove me.
These days I am still being asked – why have I not used force against the protesters? I said in the past, and reiterate now: it’s easy to be talking tall retrospectively. It’s genuinely easy to, at first, say that it was due to my decision not to use force in 2018 which allowed for a bloodless transition from that chaos and it was right, and now, witnessing the consequences of that power grab, change hearts and say it was wrong. I assure you all – no foreign actor can achieve any success in your country if it does not have supporters internally, some sort of a Trojan horse to ruin our house from within using our own hands. Unfortunately, there were such players internally, and the deceived public followed their lead.
Even today and even it’s too late after seeing so many disasters and destruction our society is able to thwart the scenarios of those with distinct geopolitical interests – by standing up to it, by demonstrating its unity and strength in the protection of our national interests. We need to realize that every belated move, each next day takes us closer to a new impending danger.
Months after the power grab, during the snap parliamentary elections, we were ringing this alarm bell. Almost alone in the beginning and later with a number of other forces we were yelling, crying, proving and begging our people – to sober up and prevent the disaster before it’s too late. You should remember that our slogan at the December 2018 snap parliamentary elections was “If you are concerned about Armenia’s security, about the future of Artsakh – vote for Republican!”. Sadly, the biblical truth was proven right again: “no prophet is welcome in his hometown”. The results of latest elections again testified to the fact that our society had not fully realized the extent of everything that happened in this period,” Sargsyan noted.
Հայերեն На русском