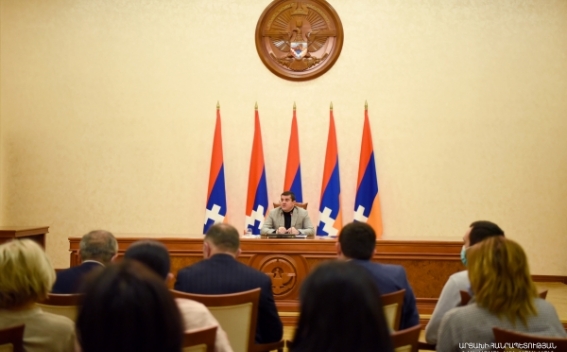 On December 29 President of the Artsakh Republic Arayik Harutyunyan received the staff members of Hadrout secondary school after M. Manvelyan, Shoushi secondary specialized music school after D. Ghazaryan and school after Kh. Abovyan.
The Head of the State voiced his gratitude to all the teachers of the schools and employees of the art institutions of the occupied communities, who despite the difficult social and living conditions continue to diligently carry out their job, in this difficult period ensuring uninterrupted educational process for the displaced pupils. Arayik Harutyunyan also noted that from September 1, 2022, schools and kindergartens of Hadrout and Shoushi will have new separate buildings in capital Stepanakert.
Answering the teachers' questions and concerns about the future and security, the President stressed that the people and the authorities of Artsakh will never accept any status within Azerbaijan, and the security of the country is and will be further on ensured by the Defense Army and the Russian peacekeeping troops. Touching upon the social problems of the displaced citizens, A. Harutyunyan noted that today the state spares no effort to completely solve the housing problem, as well as to provide them with work and other social guarantees. Within this context, the Head of the State emphasized that, according to his instruction, giving priority to the displaced citizens will be among the most important principles of the recruitment policy in all structures of Artsakh.