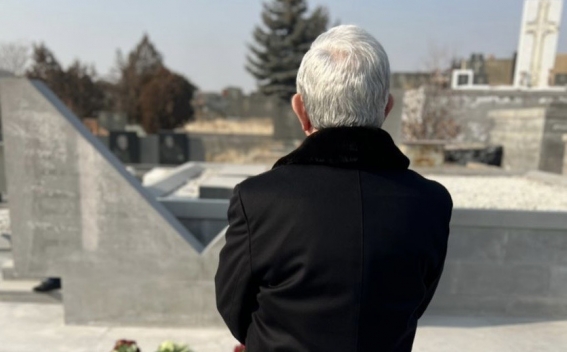 Third President of Armenia Serzh Sargsyan on Friday visited the grave of the national hero of Armenia and Artsakh (Nagorno-Karabakh), Major General of the Armenian Armed Forces Arkady Ter-Tadevosyan—a.k.a. Commandos—, who, with his many comrades-in-arms, passed the victorious path of the Artsakh liberation war with honor, according to the Facebook page of the third President of Armenia.

The ex-President, together with Ter-Tadevosyan's family members, laid flowers at the tomb of this famous Armenian military figure, and paid tribute to Ter-Tadevosyan and all Armenians who served the homeland unconditionally and were immortalized by their heroism.

Also, a wreath on behalf of the third President of Armenia was laid Friday morning at Yerablur Military Pantheon in Yerevan—at the memorial to the brave who sacrificed their lives for the freedom and independence of the homeland.
Հայերեն На русском