Some Roads Are Closed and Difficult to Pass in Armenia 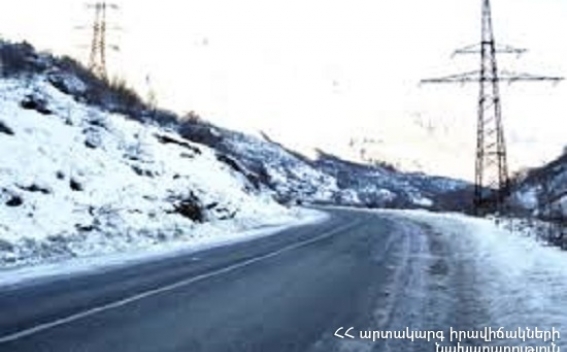 From M1 roadway of Shirak province to Musayelyan, Krasar villages and Amasia-Berdashen roadways are difficult to pass.

Vardenyats Pass is difficult to pass, chains need to be applied for trucks with trailer.

Black ice is formed on roadways of Syunik, Vayots Dzor, Aragatsotn, Lori and Shirak provinces and on Artik-Alagyaz roadway.

There is blizzard in Shinuhayr village of Syunik province and in section called "Meghru sar".

It is snowing in Vardenyats Pass, in Vayots dzor province, in Spitak, Stepanavan and Tashir towns of Lori province, in Hrazdan and Tsaghkadzor towns of Kotayk province, in Ijevan and Berd towns of Tavush province.

According to the information provided by the Department of Emergency Situations of the Ministry of Internal Affairs of Georgia and from the Department of Crisis Management Center of the Republic of North Ossetia of the Ministry of Emergency Situations of the Russian Federation, Stepantsminda-Larsi highway is open for all types of vehicles.