Armenia’s Envoy for Dialogue with Turkey Presents Details to Lawmakers 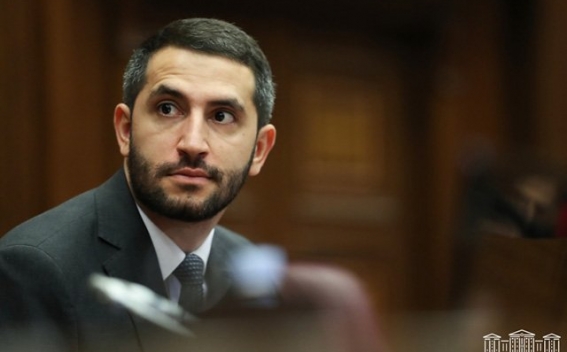 The Republic of Armenia is in favor for the borders with Turkey to be opened and relations to be normalized swiftly without preconditions, the Deputy Speaker of Parliament Hakob Arshakyan said in his speech to lawmakers during the January 17 session, Armenpress reports.

Answering a question from opposition Hayastan MP Agnessa Khamoyan, he said the normalization is in the interests of Armenia and the Armenian people.

MP Khamoyan asked for details from the meeting between the special envoys of Armenia and Turkey which took place recently in Moscow.

“Mr. Arshakyan, the foreign ministry’s statement says that the meeting was held in a positive and constructive atmosphere. As your colleague stated, since important processes are taking place in the country, could you eventually inform the society on the processes and this positive and constructive atmosphere? Could you also explain where the agreement on having special representatives for attempting a normalization of relations between Armenia and Turkey was reached?” Khamoyan asked Arshakyan, who is the Acting Speaker of Parliament due to Speaker Alen Simonyan currently being on an official trip abroad.

Arshakyan responded by saying that ever since Armenia’s independence and from the time when Turkey closed the borders the official position of Armenia has always been in favor of establishing relations and repoening of borders without preconditions.

“This logic hasn’t changed, the Republic of Armenia is maintaining this position now as well, and we are in favor of the reopening of borders and swift normalization of relations without preconditions. This is in the interests of Armenia and the Armenian people. Regarding the negotiations which took place during the meeting: the statement that the foreign ministry released is essentially describing the course of the negotiations. But if you want to obtain deeper and more comprehensive information regarding the course of the very negotiations itself, I believe from collegial and institutional perspective all mechanisms are in place for us to have such discussion and for you to have the chance to ask your questions,” Arshakyan said.

MP Khamoyan was dissatisfied from Arshakyan’s answers, and Deputy Speaker Ruben Rubinyan himself – the Armenian special envoy for dialogue with Turkey - took the floor to present some details from the meeting with his Turkish counterpart.

Hayastan MP Gegham Manukyan inquired from the technicalities, asking whether or not Rubinyan engaged in the negotiations with the Turkish envoy on behalf of the Armenian parliament given that he was sent to Moscow formally under the instruction signed by the Speaker on January 13.

“Each negotiation has a delegation, a head of delegation, there is a respective procedure, the agenda, timeframes, and expenses. All these procedures were adhered to in this case as well,” Arshakyan said, adding that they are open to answer remaining questions from the opposition MPs.