Establishment of a Public Council and Possible Changes to the Constitution. Arayik Harutyunyan Met with NGO Representatives 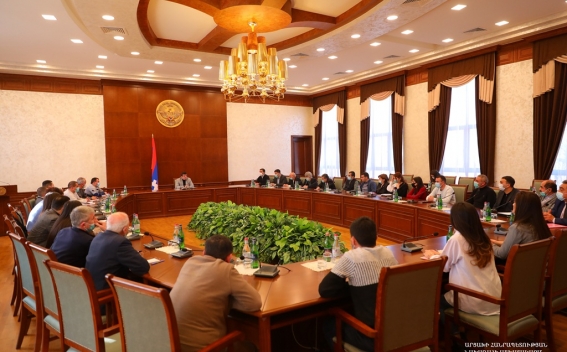 On January 18 President of the Artsakh Republic Arayik Harutyunyan met with a number of NGO representatives.
In question and answer format, a wide range of security-related, socio-economic, domestic and foreign political issues were discussed during the meeting. The issue of establishing a public council of the Republic of Artsakh in the near future was in the center of special attention. This apolitical body will be formed from members of the public sector who are respected and trusted by the public, with relevant human qualities and knowledge, and will be aimed at ensuring the participation of civil society in public administration processes.
Speaking about issues of public importance, the Head of the State noted that in the current difficult situation created in the aftermath of the war, the public authorities of the Republic of Artsakh continue to carry out their powers based on the Constitution and legislation, however, in order to respond more effectively to the new problems and challenges of state institutions, there is a proposal on the part of political circles to make some changes in the Mother Law. According to Arayik Harutyunyan, a corresponding working group will be formed in the near future, which will make the issue of possible constitutional changes a subject matter of public discussions.
The President stressed that the possible constitutional reforms will be elaborated exclusively within the framework of the uncompromising course towards recognition of the independence and strengthening the statehood of the Artsakh Republic.