Armenian FM on New Proposals: We are Trying to Figure out What is Unacceptable to Azerbaijan 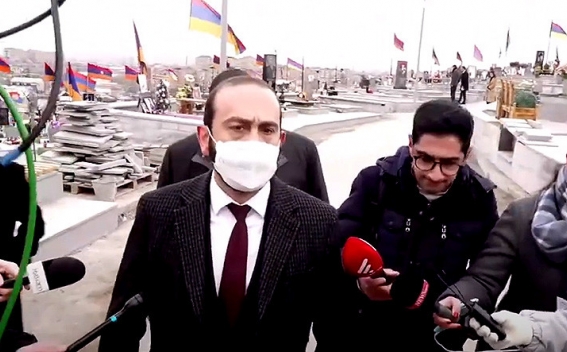 Armenia is trying to understand what is unacceptable to Azerbaijan with regard to its new proposals that were communicated to Baku through Moscow last week, Foreign Minister Ararat Mirzoyan told reporters during his visit to the Yerablur Military Pantheon on the Army Day celebrated on January 28, Panorama.am reports.

On January 20, Azerbaijani Foreign Minister Jeyhun Bayramov stated that the “preconditions” set by Yerevan for stating the delimitation and demarcation of the Armenian-Azerbaijani border are unacceptable to Azerbaijan.

“We are trying to get clarifications on which part is unacceptable [to Baku] and on what grounds. Accordingly, new solutions may be offered,” Mirzoyan said.

At a Q&A session in the parliament on 19 January, the foreign minister said Armenia had prepared and submitted a package of proposals on de-escalation of the situation on the Armenian-Azerbaijani border, which also contains measures aimed at enhancing stability. In his words, the proposals were passed to Russia and at their mediation to Azerbaijan and other partners.