Friendly Relations Between Our states Are Harmoniously Developing: Eduard Aghajanyan to Ambassador of Germany to Armenia 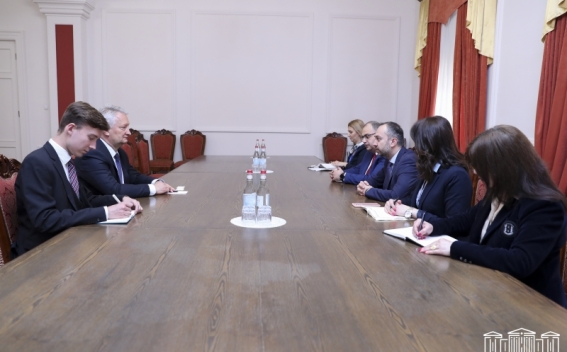 “Friendly relations between our states and parliaments are developing quite harmoniously,” the Chair of the RA NA Standing Committee on Foreign Relations Eduard Aghajanyan said to the Ambassador Extraordinary and Plenipotentiary of the Federal Republic of Germany to Armenia Victor Richter.

The Head of the NA Friendship Group Armenia-Germany Vladimir Vardanyan also took part in the meeting held on May 6.

Welcoming the Ambassador in parliament, Eduard Aghajanyan noted that especially during 2019, the high-level mutual visits were activated. The official mutual visits of the German Chancellor Angela Merkel, the RA Prime Minister Nikol Pashinyan and the RA NA President took place. However, direct contacts at the level of mutual visits of official delegations have been temporarily interrupted because of COVID 19. Despite that circumstance, the Committee Chair noted with satisfaction that the political dialogue between the two countries has not been interrupted, and both sides are interested in further deepening of the Armenian-German cooperation.

According to Eduard Aghajanyan, Armenia appreciates the financial and technical support of the German government to reforms in our country in democratic and economic fields.

The Ambassador Victor Richter thanked the MPs for the warm reception. He welcomed the democratic reforms in Armenia and the principled policy adopted by the Government in the fight against corruption.

Both sides stressed the importance of the international partners’ response to efforts to strengthen long-lasting peace and stability in the region, build confidence, as well as promote the regional cooperation.

In this regard, it was noted that Armenia highly appreciates the impartial discussions in the Bundestag on the war in the Nagorno Karabakh unleashed by Azerbaijan.

The continuity of the implementation of joint programs with the GIZ and IRZ organizations in Armenia was emphasized.

The sides referred to the settlement of the Nagorno Karabakh issue, the preservation of cultural heritage, the return of Armenian captives being held in Azerbaijan, as well as the issues related to the normalisation of relations between Armenia-Turkey.