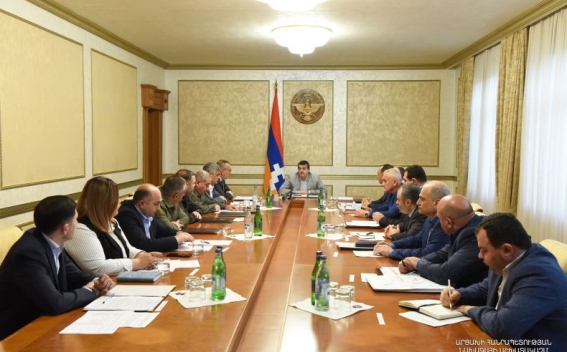 On May 12, Artsakh Republic President Arayik Harutyunyan chaired a regular sitting of the Security Council.
Among other issues on the agenda, the Head of the State referred to the increase of cases of public order violation and encroachments against the internal security, in particular, tragic accidents due to driving while intoxicated, and hooligan-motivated crimes, considering them unacceptable and inadmissible.
"We must take steps to maintain internal law and order and make decisions today. If a police officer is shot for demanding order from a driver who is not sober, it means that the shot was aimed at the state," the President said.
According to Arayik Harutyunyan, there are clear guarantees and mechanisms in terms of external security, whereas maintaining internal discipline is under the full responsibility of the authorities. In this context, the Head of State instructed law enforcement officials to elaborate a plan and conduct rigorous inspections, using all measures of legal liability if needed.
The President once again highlighted that there should be no priveleged before the law in Artsakh, and high-ranking officials should show exemplary work and ethical behavior.
"Our greatest advantage should be the country's internal discipline. Speaking of the demographic growth, social and development programs, we should be consistent in maintaining the supremacy of law, and ensure the internal security of the population", President Harutyunyan noted instructing to intensify the fight against illegal activities through appropriate mechanisms.
Issues related to the rent payments of the displaced residents and reviewing other social programs were on the discussion agenda as well. President Harutyunyan underscored in his remarks that vital interests and real problems of the displaced should be taken into account in state programs, making decisions in that context.
According to the agenda, particular attention was paid to other issues related to a number of domestic and foreign challenges.