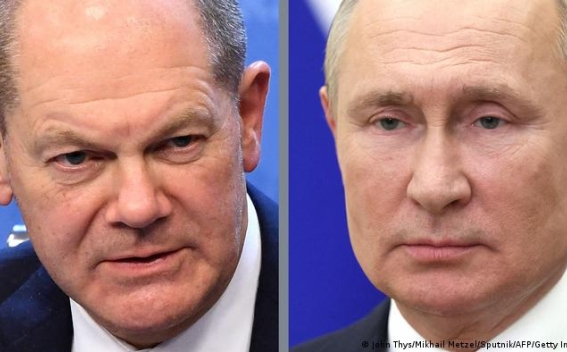 Russian President Vladimir Putin on Friday in a telephone conversation with German Chancellor Olaf Scholz once again discussed the situation in Ukraine, including the course of talks between Moscow and Kiev delegations, the Kremlin press service said, TASS reports.

It is noted that the conversation focused mainly on the humanitarian aspects of the situation in Ukraine. "Vladimir Putin outlined in detail the logic and the main tasks of the special military operation to protect the people's republics of Donbass, spoke about the measures that are being taken to ensure the civilians’ safety," the statement said.

"It was also mentioned that with the participation of the UN representatives and the International Committee of the Red Cross, the evacuation of civilians held by Ukrainian security forces at the Azovstal steel plant in Mariupol was carried out," the Kremlin informed.

Putin also drew Scholz's attention "to the continuing gross violations of international humanitarian law by the Nazi ideology militants and the inhumane methods that they are using," the press service said in a statement.

The Russian and German leaders discussed and gave a fundamental assessment of the process of the Russian-Ukrainian negotiations, which are "essentially blocked by Kiev," the Kremlin stressed.

The discussion was held at the initiative of the German side.