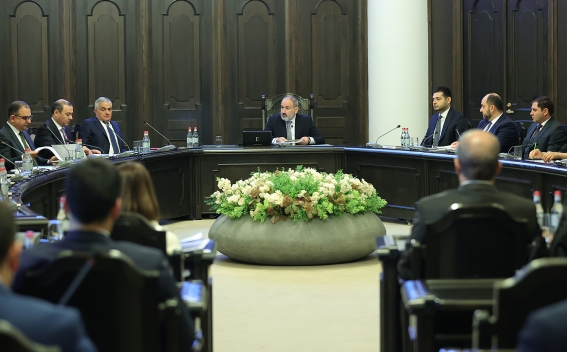 The regular Cabinet meeting took place today, chaired by Prime Minister Nikol Pashinyan. The Government approved the public-private social partnership of providing refund to pensioners from non-cash payments. According to the Minister of Labor and Social Affairs of the Republic of Armenia Narek Mkrtchyan, starting from July 1, pensioners and recipients of benefits, having debit cards of partner banks who will make purchases and payments with the cards at retail outlets or at pay points located near service provider organizations will receive 10% refund from their previous month’s non-cash transactions. It will be formed in the following proportion from the allocations of the event participants. state - 5%, partner bank - 5%. The total amount of refund for one month cannot exceed 5000 AMD, regardless of the amount of non-cash transactions. By June 1, the list of partner banks will be published. A pensioner can change his bank if he sees that his bank from which he receives the pension is not among the partner banks.

Nikol Pashinyan highlighted the decision, noting that the program will be piloted for 6 months. “It will start to work, we will analize and realize the opportunities and drawbacks, making improvments during the process”. The Prime Minister noted that the program has also a social significance, as it will be an attempt to reduce inflation to some extent. "The analysis of the data accumulated during the program with the help of the Central Bank is very important. I attach equal importance to this part, because if we can analyze that data, the purchases made by pensioners, we will understand particularly what they spend money on. In this case, maybe, we will analyze our social policy, make some adjustments, which will help to make social assistance as targeted as possible“, Nikol Pashinyan said. The PM also noted that the improvement process of the system should be continuous. "It can become a much more serious system. It is more important to introduce a system module, and we must work for the further development of that".

The Government approved the draft laws "On amendments to the Law on Remuneration of Public Officials and Civil Servants" and "On Amendments to the Law on Ensuring the Activities, Services and Social Guarantees of Officials”. The adoption of the bills is conditioned by the need to review the remuneration system of judges of the Court of Cassation and the Constitutional Court. With the adoption of the drafts, it is expected that the extra payment of the judge, Vice-president and President of the Constitutional Court will be set at 80%, and of judges of the Court of Cassation (including the President and the President of the Chamber) at 50% of salary as remuneration in accordance with their high status and responsibility defined by Point 10 of Article 164 of the Constitution.

Referring to the drafts, Nikol Pashinyan noted that such initiatives are often criticized. "I know that many people will say that in this difficult social situation, the salaries of judges, judges of the Constitutional Court, are being increased. As I said before, we make these decisions primarily not for the sake of judges, but for the sake of the citizens who deal with those courts. Fairness and propper justice is the most important opportunity we should have in the country. This has social, political and legal significance. We have to follow this path consistently, because we want a judicial system in the Republic of Armenia that, so to speak, looks into the eyes of the people and not at the hands of the people. This is a very important record. A lot of chain processes originate from this, which affect the social, moral condition and general well-being of the people," the Prime Minister said.

In that context, the Prime Minister stressed the need to move forward consistently in that direction. "We make these decisions also for the reason that when we say, we declare that we want a truly independent judiciary in the country, it is not just for saying, it is not a political slogan. It is a belief, a desire, a goal that we must reach consistently. We, of course, know that there are many judges who are guided by their conscience and the law, so we must support these people, encourage them as a society, as a government, as a country. This is not just a financial issue, it is also a form of public political support to all the judges who serve their conscience, their conviction, the Constitution, the law, and thus the people. It is very important that we have the determination to implement these measures, irrespective of the fact that we understand that they are not popular decisions, but they are very important decisions."

By the decision of the Government, in order to provide subsidies to the communities of the Republic of Armenia in addition to the subsidies already envisaged by the state budget, 790,165.6 thousand AMD was allocated to the regional administrations of Aragatsotn, Armavir, Gegharkunik, Lori, Kotayk, Shirak, Syunik, Vayots dzor and Tavush for carrying out the obligations before construction companies.