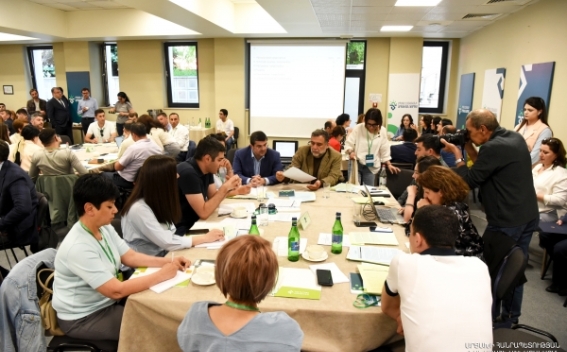 On May 22, Artsakh Republic President Arayik Harutyunyan partook in the closing ceremony of Artsakh Forum organized in Stepanakert on the initiative of "THE FUTURE ARMENIAN" Development Fund.
The Head of the State highlighted thematic discussions organized during the forum, emphasizing that such initiatives make the vision and approaches of the Armenians of Artsakh towards the future more viable. The President of the Republic referred to the situation in Artsakh in the post-war period, the current problems and the work aimed at overcoming them.
According to Arayik Harutyunyan, both the post-war difficulties and long-term challenges Artsakh and Armenia face can be overcome only through consolidation of all capable forces and sound discussions. Within this context, the President voiced his special gratitude to the co-founders of "THE FUTURE ARMENIAN" initiative, especially to philanthropist Ruben Vardanyan, for constantly standing by Artsakh and showing active support through various programs.