Collector Coin "Davit Bek" Has Been Put Into Circulation 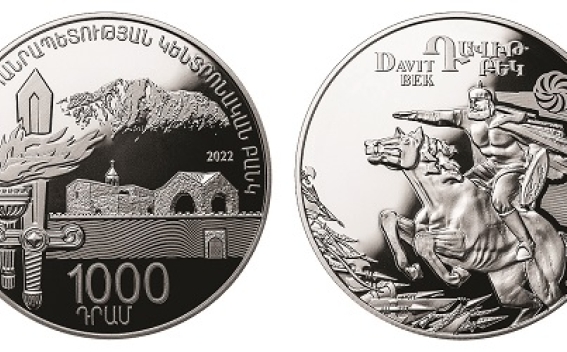 The Central Bank of Armenia has put the silver collector coin "Davit Bek" into circulation starting May 23, 2022.
The collector coin dedicated to Davit Bek
Davit Bek (date of birth unknown, died at the end of 1728) - a leader of the Armenian national liberation movement, a military commander.
He served in the army of the king of Georgia Vakhtang VI. At the request of the Armenians of Syunik, he entered Sisian and Kapan with his military force in 1722 and led the armed popular struggle against foreign occupiers.
In 1722-1725, Davit Bek liberated all of Syunik from the Iranian troops and Muslim invaders. In a short time, he organized regular Armenian contingents and a professionally trained army, restored old fortresses and fortifications, created new military strongholds, and established an independent Armenian principality with its center in Halidzor.
In 1725-1727, the Ottoman army attempted to seize Syunik. Starting from February 26, 1727, Davit Bek and his forces put up a heroic resistance to the numerically superior enemy who surrounded his major fortress of Halidzor, and on March 4, with a sudden counterattack, they defeated the invaders and threw them out of Syunik. In the battle of Halidzor 13000 Turkish soldiers were killed. The Armenians counted 148 military banners among the captured materiel. This victory contributed to the consolidation of the Armenian liberation movement in Syunik and Artsakh and to further successes of the Armenian troops.
Davit Bek is a symbol of patriotism and the national liberation struggle of the Armenian people.
The historical novel by Raffi "Davit Bek", the eponymous opera by Armen Tigranyan and the feature film by Hamo Beknazaryan are dedicated to Davit Bek. A monument to Davit Bek is erected in the city of Kapan (Syunik region), streets in Yerevan and in other settlements of the Republic of Armenia are named after him.
​Obverse: the fortress wall of Halidzor against the background of Mount Khustup, a torch and a sword.
Reverse: a fragment of the monument to Davit Bek in Kapan (sculptors: S. Baghdasaryan, M. Nurijanyan, 1978), the arms thrown at the feet of a horse.
Designer: Vardan Vardanyan.
The coin is minted in the Mint of Poland.​ 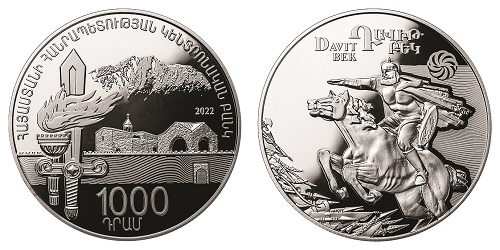