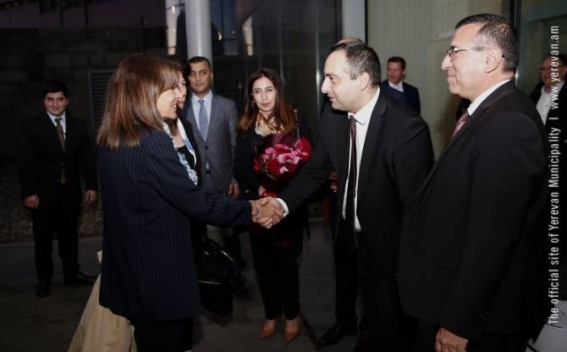 Mayor of Paris Anne Hidalgo arrived in Armenia on an official visit on May 26, the Yerevan City Hall said in a statement, armenpress reports.

She was welcomed by First Deputy Mayor of Yerevan Levon Hovhannisyan at the Zvartnots International Airport.

In his remarks Levon Hovhannisyan expressed hope that during the upcoming meetings at the Yerevan City Hall not only the programs, that have already been implemented between the Armenian and French capitals, will be discussed. He assured that they will succeed in agreeing over new areas of partnership in coming days.

The Paris Mayor thanked for the warm welcome and assured that the French capital is ready to assist and support the city that gave Paris, for instance, the idea of TUMO, in everything within its capacities.

The Mayor of Paris is also scheduled to meet with Mayor of Yerevan Hrachya Sargsyan. Issues relating to the further cooperation and ongoing programs between the Armenian and French capitals will be discussed.