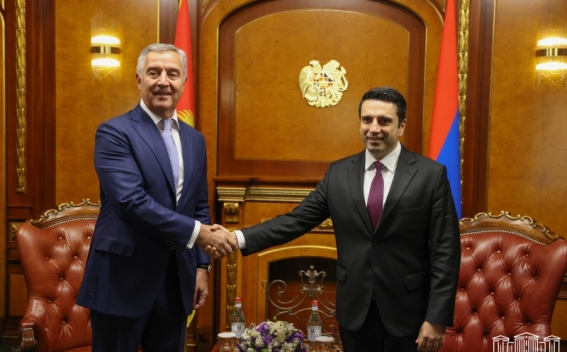 On May 27, the RA NA President Alen Simonyan received the delegation led by the President of Montenegro Milo Đukanović being in Armenia on an official visit.

After the private talk with the President of Montenegro the RA NA President considered symbolic his visit, reminding him that since about the 16-year diplomatic relations it is the first visit to the Republic of Armenia at this high level.

The sides discussed the format of bilateral cooperation, attaching great role to the inter-parliamentary relations. The effective and continuous dialogue between the legislative bodies has been observed as priority, and the parliamentary Friendship Groups will greatly promote it.

The interlocutors focused on the comprehensive cooperation with the EU, the issues of the establishment of the regional security and long-lasting peace.

Milo Đukanović noticed that the long suffering follows the short-term conflict resolutions, and its consequences have a heavy impact on the countries. He noted that he would discuss the issues of Armenian prisoners of war and the civil hostages being held in Azerbaijan with the counterparts not only of his country, but also of other countries. The President stressed that they have good will towards the region and expect qualitative stability. According to him, in these hard times for every country the most important thing is preserving the identity and the national feature, especially in the case of not large countries as Armenia and Montenegro.