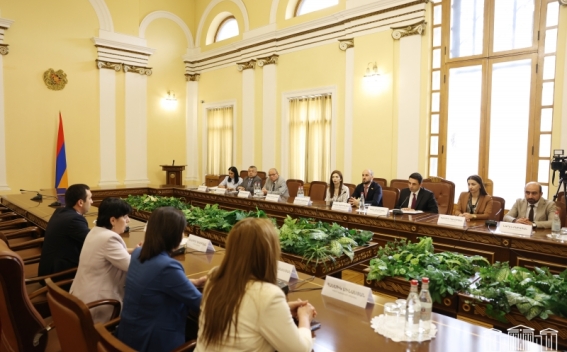 On June 3, the RA NA President Alen Simonyan received the delegation led by the Minister of Education, Science, Culture, and Sport Anahit Hakobyan of the Artsakh Republic (AR).

Welcoming the Minister, the RA NA President expressed his gratitude for the close cooperation formed between the similar Committees engaged with education and science of Armenia and Artsakh. According to the Head of the RA Parliament, the development of the science sphere on the basis of that cooperation, the solution of the humanitarian issues, the legislative reforms, the protection of the historical-cultural and spiritual values on the territories passed under the control of Azerbaijan because of war in Artsakh and the educational programmes being implemented in the IT sphere of Artsakh.

Highlighting the regular meetings with the colleagues of Artsakh, Alen Simonyan mentioned some details of the last joint discussion, according to which, today Azerbaijan tries eliminate the traces of the Armenian records from the historical-architectural monuments. The Head of the legislative body added that big work should be done in terms of presenting this problem to the international community,

Alen Simonyan highlighted the role and importance of the education in the current situation, on which the further discussion was developed.

The Minister of Education, Science, Culture, and Sport Anahit Hakobyan of the Artsakh Republic evaluated the bilateral cooperation in all spheres, especially in terms of the elaboration of the educational strategy programme, the legislative reforms of the sphere and the cultural cooperation.