Armenia Defense Minister: Head of General Staff of Armed Forces Will Be Appointed after Structural Changes 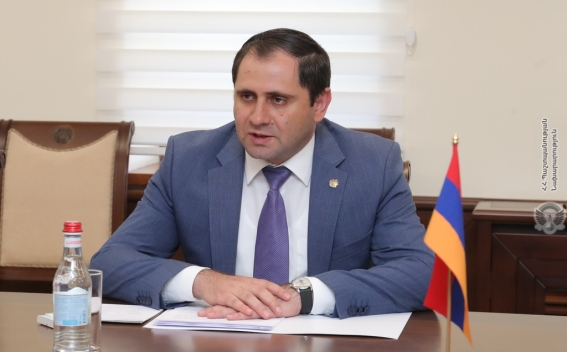 After structural changes in Armenian Defense Ministry, we will have a new model, according to which the Chief of General Staff of the Armed Forces will be the First Deputy Defense Minister, Defense Minister Suren Papikyan said in an interview to the Public Television, NEWS.am reports.

"Certain changes are taking place in the army management, these are not fundamental changes, in any case the Armed Forces will only deal with the defense of the country, combat training. Purchasing, maintenance, provisioning: all of that will be handled by departments. That is, starting with logistics support, everything will be done not by the military. A lot of things will be delegated," he said.

The minister also said that this law had been circulating in the government for a long time and would soon be submitted to the National Assembly.

Asked if the law is the reason we still don't have a chief of general staff, the minister said that's not the reason. "The reason is to make the right decision, of course. But he, the Acting Chief of the General Staff, is fully performing his duties today," he said, adding that he doesn't see any problem with that.

Answering the question about the army's morale, Suren Papikyan said it's naturally difficult to recover after the war, but the morale is quite high. "And in this direction, we have work to do: secure the rear of the army, trust the army... The army is waiting for support, it's about moral support. And we have to go that way, the link between society and the army should always work."

Responding to a question about the conscription, the minister mentioned that the next conscription will take place from June 13 to July 31. "All of our conscripts will go through the educational process, after which they will be transferred to military units."