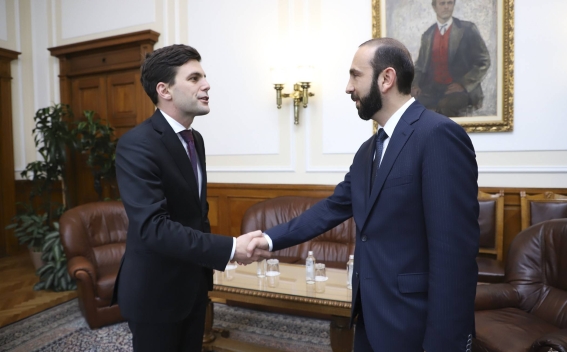 On June 14, the Foreign Minister of Armenia Ararat Mirzoyan, who is in Bulgaria on an official visit, met with the Speaker of the National Assembly of Bulgaria Nikola Minchev.

The interlocutors commended the bilateral relations based on common history and warm friendly relations between two peoples, also emphasizing the contacts at the inter-parliamentary level in terms of their expansion and deepening. Both sides underlined the readiness to promote the ties between the friendship groups operating in the Armenian and Bulgarian Parliaments, as well as to expand the cooperation in the international parliamentary platforms.

Ararat Mirzoyan presented to Nikola Minchev the reforms carried out in Armenia aimed at democratic development, protection of human rights and ensuring the rule of law. The Foreign Minister of Armenia stressed that democratic reforms in Armenia are irreversible.

The sides exchanged views on the prospects of developing economic cooperation. In terms of activating peoples to peoples contacts and business ties, the implementation of the direct flight program connecting Yerevan and Sofia was emphasized.

The prospects of deepening the Armenia-EU relations were discussed.

The Foreign Minister of Armenia briefed the Speaker of the National Assembly of Bulgaria on the efforts of the Armenian side towards establishing peace and stability in the South Caucasus, the recent developments in the relations between Armenia and Azerbaijan, and in the process of settlement of the Nagorno-Karabakh conflict. The need to achieve the lasting and comprehensive settlement of the Nagorno-Karabakh conflict through peaceful negotiations within the mandate of the OSCE Minsk Group Co-Chairmanship was stressed.

Minister Mirzoyan also referred to the humanitarian situation resulting from the Azerbaijani aggression against Nagorno-Karabakh in 2020, in particular, the repatriation of Armenian prisoners of war and civilians illegally held in Azerbaijan, the preservation of Armenian cultural and religious heritage in the territories fallen under the control of Azerbaijan, and the deliberate creation of humanitarian crises by Azerbaijan in Artsakh.