The Statements of Azerbaijani Officials should be Warning Sign, We should Discuss This Issue in the CSTO. The Prime Minister to the CSTO Security Council Secretaries 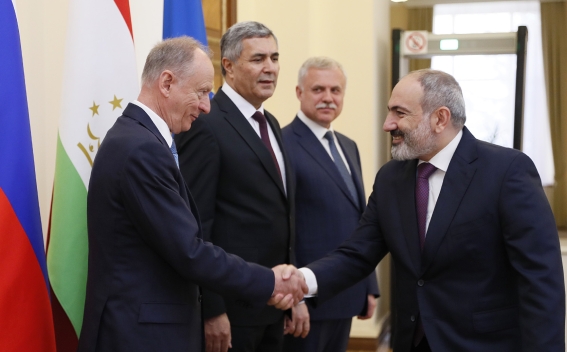 I welcome you on the occasion of the regular sitting of the Committee of Secretaries of the Security Councils of the CSTO member states in the Republic of Armenia, which is taking place in our country within the framework of Armenia's chairmanship in the CSTO.

This is really a double jubilee year for our organization. We are celebrating the 30th anniversary of the signing of the Collective Security Treaty, the 20th anniversary of the establishment of the Collective Security Treaty Organization, and it is a great honor for us to chair our organization in this jubilee year. You know, we have discussed it many times, increasing the efficiency of the CSTO is one of the most important priorities of our presidency, we thought and still think that the rapid and crisis response mechanisms in specific situations should be improved.

I would like to note that, in principle, we also have a legal framework in this regard, On December 10, 2010, by the decision of the Collective Security Council of the Collective Security Treaty Organization, a provision was adopted regulating CSTO's response to crisis situations, and I think this document quite clearly defines the mechanisms that exist in our Organization. In particular, it outlines what we should consider a crisis situation and how we should respond to it.

I would like to draw your attention to the fact that there is such a concept in that provision - "mission", which is defined as follows: A group of experts from the member states appointed by the CSTO member states in accordance with this provision, to be temporarily sent to the crisis zone to monitor the situation, understand the situation on the spot, develop proposals on the further measures of the Organization aimed at preventing the crisis situation and solving it, as well as for fulling other functions defined by the CSTO Collective Security Council.

I would also like to draw your attention to the fact that in the second chapter of this document there is a chapter called "Monitoring", and the CSTO Secretariat regularly collects information and conducts analysis of the situation in the area of responsibility of the organization and on its development trends in order to identify the preconditions for crisis situations.

Why am I talking about this? You know that the Azerbaijani armed forces invaded our territory in May last year, and we applied to the CSTO. I have spoken about it many times, and as the Chairman, I want to emphasize that this issue should be discussed properly. Why? Because we see that aggressive statements by Azerbaijan continue, we should discuss this issue, especially considering that Armenia has applied to the CSTO, as it is a very fundamental issue for both us and the Organization.

Our position is that there is a concrete border between Armenia and Azerbaijan, because in 1991, when the Commonwealth of Independent States was established, an interstate agreement was signed, which clearly states that the countries mutually recognize each other's existing borders. This refers to the administrative boundaries of the Soviet period, and I think we should have this as a starting point. The opposite interpretation of this situation, I think, will reduce the effectiveness of the CSTO.

I hope that the nuances mentioned during this meeting and during your sitting will also be discussed. I recently raised this issue during the informal CSTO summit in Moscow. We have started a discussion, once again, as the Chairman, I would like to instruct the CSTO Secretary General to organize this issue in accordance with our charter documents, as the situation in our region is stable but tense. And the statements made by Azerbaijani officials should be a warning sign, I think we should discuss this issue in the CSTO format.

Let me welcome you once, I'm so glad to see you. And I am very happy for the dynamics that occured in the CSTO in the post-Covid period, because in the last two years we have actually had very little contact with the existing's formats. Of course, we have continued to work online, but I think we all agree that such meetings and contacts are very important for our work. I am glad that we returned to this regime, it happened in the year of our presidency, in this important jubilee year.

The Prime Minister discussed issues related to the agenda and activities of the Organization with the Secretaries of the Security Councils of the CSTO member states. The participants of the sitting exchanged views on regional and international security challenges.