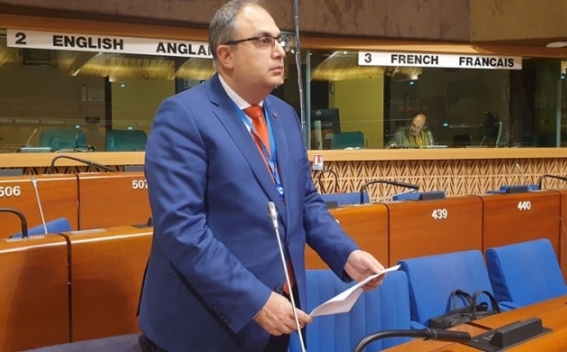 The member of the RA NA delegation to PACE Vladimir Vardanyan gave a speech at PACE Plenary Session.

For many years we deemed that we finally enjoy peaceful and tranquil times in Europe. We did believe, that due to the Second World War tragic experience at least our generation would be secured from any armed conflicts, global catastrophes and disasters. Today everybody is alarmed that war has returned to Europe. Peace was just an illusion, nevertheless, even during the times which seemed peaceful and safe, war always was in and around Europe, catastrophes were amongst us, but we kept a blind eye on it. Why were we indifferent and deaf knowing, watching, following, and reading about armed conflicts in Cyprus, in Balkans, Moldova, Georgia, Tajikistan, Kosovo, Nagorno-Karabakh, Libya, Syria, Iraq, Turkey and elsewhere?

The question is complicated but the answer is quite clear. These aggressions, wars, armed conflicts, and civil wars were less visible since most of us thought that they occurred far away from us. We wanted to believe that those wars were waged only on TV. Just by switching the TV channel, people could ignore the reality on the ground. Current state of art in international politics and recent developments force us to understand that no state is secured from war, even the wealthiest and protected ones. It means that we should be quite sensitive to even a single deviation from democracy, fundamental human rights and the rule of law which undermine pillars of peace and sustainability and pave a fertile ground for war.

Quite often, when I refer to the Nagorno-Karabakh conflict related issues, I witness silent and indifferent faces of some of my colleagues, confessing that they are tired of those discussions. But we are not voicing one single conflict, we are alarmed about the violations of core values of our Organization, such as respect for the Rule of Law, protection of human rights, promotion of democracy and upholding human dignity.

Dear colleagues, do not worry, I am not addressing the Nagorno-Karabakh conflict in this speech. Just be aware that blindness towards particular violations of our core principles lead to global catastrophes.

Ladies and gentlemen, this hemisphere is not only a place for speaking, it is also a space for listening.

And please do not be deaf when we are speaking about the core values of our Organization.'' Vladimir Vardanyan concluded his speech.