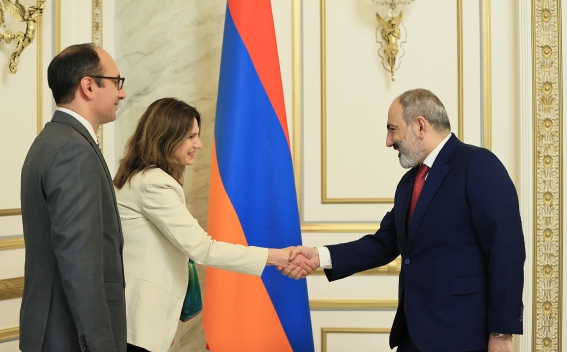 The Prime Minister congratulated Mrs. Petrova on assuming the post and expressed hope that with her knowledge and experience she will contribute to the increase of the efficiency of the cooperation between the Government of the Republic of Armenia and the IMF. Nikol Pashinyan noted that the previous three-year joint program had been successfully implemented and expressed confidence that new programs would be developed in the near future.

Nikol Pashinyan noted that the previous three-year joint program was successfully implemented and expressed confidence that new programs will be developed in the near future. The Head of the Government then referred to the macroeconomic situation of our country, adding that quite high economic indicators are registered in the current year, and the state budget revenues have an ahead of time growth. The Prime Minister spoke about the fight against corruption, reduction of cash circulation, introduction of a universal declaration system, and other reforms, emphasizing that the Government is gaining confidence on this path, as the previous reforms have yielded positive results.

The head of the IMF mission in Armenia emphasized the intensive cooperation with the Armenian Government, emphasizing that the IMF will continue to contribute to economic stability and development in Armenia with new programs. Iva Petrova considered the economic indicators registered in Armenia impressive, stressed the need to ensure the continuity of reforms.

The interlocutors also touched upon issues related to road construction, education, infrastructure, water resources management, reservoir construction, creation of a favorable environment for business, customs regulations, and the implementation of investment programs in other public spheres.