State Budget Revenues and Expenditures will Increase by 40 Billion AMD. The Government Makes a Corresponding Decision 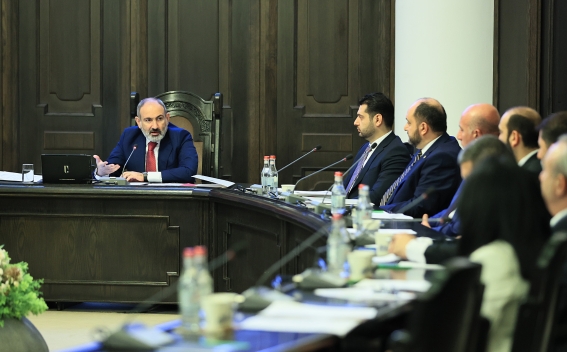 The Government took a decision, as a result of which the state budget revenues and expenditures will increase by 40 billion AMD. According to the Minister of Finance Tigran Khachatryan, at present the actual indicators of tax revenues are a sufficient basis to increase the index of tax revenues by 40 billion AMD at this stage. “In the framework of the discussions of medium-term expenditure programs for 2023-2025, when we were discussing the activities to be carried out in 2023, we registered that we have capital programs in different spheres, which can be implemented also in 2022 if we have finances. We discussed the capital programs included in the expenditure priorities approved by the state budget 2022 and we plan to include some of them among those to be financed in the near future," the Minister said. Tigran Khachatryan stressed that the increase of revenues proposed by this decision will allow launching new programs in education, healthcare and physical infrastructure in the coming weeks, which, otherwise, should start in the beginning of 2023.

In order to increase the efficiency of the process of providing subsidies from the state budget aimed at the development of economic and social infrastructure of the communities of the Republic of Armenia, the Government made amendments to one of the previously adopted decisions. Accordingly, it is proposed to carry out the processes of submission, discussion and approval of subsidy applications and packages during the year preceding the year of implementation of the subsidy program, which will allow to start the implementation of the subsidy program from the beginning of the year and construction work immediately in favorable weather conditions. Attaching importance to the amendments, Nikol Pashinyan noted that this is an attempt to improve the system so that the subsidy programs are implemented as smoothly and effectively as possible. "For the first time this year, work on subsidy programs for next year will begin in July. And as we said, let us agree that February 1 should be the date when the program should be approved, the community should announce the tender so that there will be winners in March and the construction work will start," the Prime Minister said.

The Government approved the proposal to sign the Cooperation Grant Agreement for Development between the Republic of Armenia and the United States of America. According to the substantiation, the purpose of the grant agreement is to assist Armenia in the process of reforms aimed at strengthening democracy and economic stability. The total USAID investment to achieve the objectives is $ 120,000,000, which will be allocated in stages. USAID plans to distribute its total contribution to the goals as follows: $ 68,565,000 to promote democracy and $ 51,435,000 to improve economic security.

The Government approved the procedure for organizing the procurement of construction works within the framework of satisfying the urgent needs in case of risks for human victims, significant damage to human health and the environment, large material losses, disruption of normal human living conditions or in case of danger of emerging such situations. In particular, in accordance with the mentioned procedure, the clients organize a pre-qualification process, the necessary qualification criteria for which are defined in this procedure. As a result of this procedure, the lists of pre-qualified participants are approved. In case of necessity, the clients send an invitation to the participants included in that list, who can refuse to submit an application. According to the Minister of Finance Tigran Khachatryan, the list may include the companies that will meet the criteria set by the decision. In particular, the company must not be newly created, it should have at least 3 contracts during the previous 5 years, which it has properly fulfilled.

For example, in the case of roads, it will be required that the total value of the three contracts of that company will not be less than 3 billion AMD. Nikol Pashinyan highlighted the envisaged changes within the framework of the reforms implemented in the sphere. "We are creating this mechanism to have a list of partner companies that we can work with quickly."