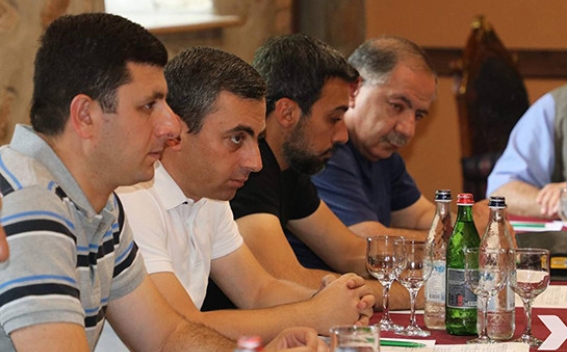 Members of Armenia’s opposition resistance movement have paid a three-day visit to the Artsakh Republic on June 21-23 to meet with local political parties, lawmakers and former presidents, the opposition Hayastan alliance said in a statement.

A separate meeting was also held at the Stepanakert City Hall with the participation of the administrative leadership of the Artsakh capital as well as heads of educational and cultural institutions.

During the meetings, Ishkhan Saghatelyan presented the further activities of the opposition movement, its challenges and tasks. Artsakh’s role in making the resistance movement nationwide and comprehensive was highlighted.

“It was agreed that despite the lack of reasonable and proper interaction between the Armenian authorities and Artsakh, joint programs and mutual visits should be carried out,” the statement said.

“It was reaffirmed that the statement adopted unanimously by the Artsakh National Assembly on April 14, which lays out the key principles and red lines for the future of the country, remains the guideline for the authorities and people of Artsakh,” it added.