Armenian MP: Right of Self-Determination is Simply a Right to Live for Nagorno-Karabakh People 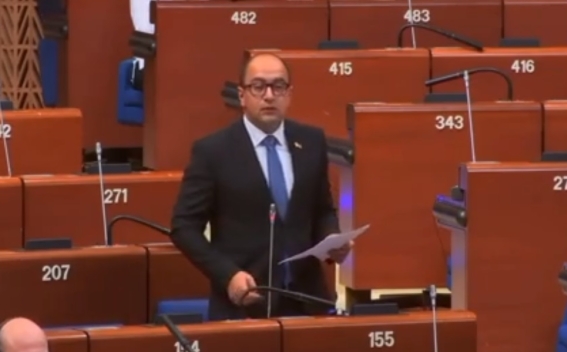 Armenian MP Hayk Mamijanyan from the opposition Pativ Unem (With Honor) faction on Friday addressed a debate on fighting vaccine-preventable diseases through quality services and anti-vaccine myth-busting held as part of the PACE summer session. His full statement is provided below, Panorama.am reports.

We all know that there was a Stone Age, a Golden Era, etc. I do think that now we are living in the "Rubber Era" of European values. They bend, they fold, at the pleasure of politicians and yesterday's discussion regarding the UK government's reaction to the decision of ECHR proves that.

Here are some more effects: the European Parliament voted four documents urging the importance of the immediate return of POWs' inadmissible social terror, i.e. leaving the people of Artsakh without gas supply in terms of severe winter, pointing the aggressor of a 40-day war and it had no consequences for the COE member State.

Dear lady, you were calling my motherland, the historic Azerbaijani territory. One of your colleagues in Milli Majilis was already preparing the right for Azerbaijani for a new aggression regarding the corridor. And Mister Mr Rafael Huseynov, we are not revanchists. We are patriots. More than that, no one speaks about the fact that a COE member State occupied the internationally recognised sovereign territory of Armenia and just refuses to leave.

Hate speech was so much accumulated by the government in my country that people were killed and the motivation was really political – extremely political. There was a tape that went viral when two people, the ex-president and the current president of the highest judicial body, discussed how they are going to fabricate cases against the opposition leaders.

So, the reason for these disasters are populists and dictators and the first one changed into dictators very fast. And this is a pandemic and we have to fight it tooth and nail, just while we were fighting Covid-19.

So, ladies and gentlemen, I was told that values are rock solid. I refuse to believe that Europe has set a blind eye on democracy and human rights. I refuse to believe that Europe has forgotten the right of self-determination which is simply a right to live for the people of Nagorno-Karabakh. Europe used to be a flagman of Christian democratic values, even if you decided to abandon that flag, we are going to wave it proudly because it is our cross to bear.