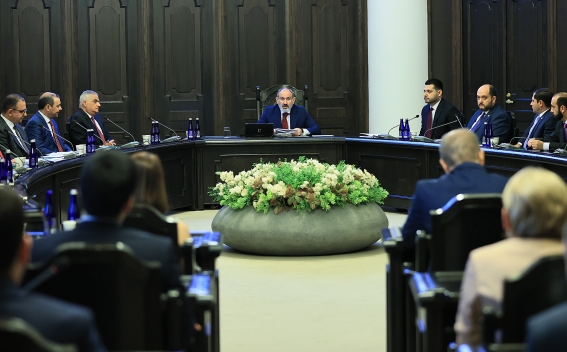 The issue was presented by the Minister of Finance Tigran Khachatryan, who noted that the 2023-2025 medium-term expenditure program is developed in accordance with the goals and policy priorities set by the 2021-2026 Action Plan of the Government of the Republic of Armenia and includes fiscal and expenditure features that should contribute to the effective and timely implementation of the Government’s Action Plan.

In particular, the Minister noted that in line with the goals of the Government's Action Plan, it is planned to increase expenditures on social security programs. “Expenditures on social protection in 2023 will increase by more than 65 billion AMD or 11.3%. This will allow to increase both pensions and payments under other social assistance programs. In particular, the new limit will allow increasing the funds allocated to state pensions by 33 billion AMD, allocating by 16.5 billion AMD more to the programs aimed at improving the demographic situation: 47.9 billion AMD against the 31.4 billion AMD in 2022, etc.," Tigran Khachatryan said. In 2023, additional funds will be allocated to increase the salaries of public servants. It is planned to direct 17.3 billion AMD for increasing salaries.

Referring to the decision, Nikol Pashinyan noted that the Medium-Term Expenditure Program envisages a significant increase in state budget expenditures and revenues. Nikol Pashinyan, in particular, referring to the increase of pensions, said, “It was also written in our pre-election program that from January 1, 2023 we will have an increase in pensions. We will talk in more detail about pension increase formulas in the near future. We will have an increase in the minimum wage. It is envisaged that the minimum salary will increase from 68,000 AMD to 75,000 AMD”. Summing up, the Prime Minister positively assessed the Medium Term Expenditure Program, urging the Cabinet members to focus and work more effectiveky.

The Government will allocate 1,385,124.6 thousand AMD to the regional administrations of Aragatsotn, Ararat, Armavir, Gegharkunik, Lori, Kotayk, Syunik, Vayots Dzor and Tavush Provinces for the implementation of subsidy programs. According to Gnel Sanosyan, Minister of Territorial Administration and Infrastructure, the allocated money is intended for co-financing 24 pograms in 18 settlements. "22 of the programs are completed, 2 are in process. Thus, if we accept today's decision, it will mean that we have already allocated 7 billion 307 million AMD for 273 programs during these 6 months," the Minister said.

Nikol Pashinyan presented the co-financed programs. In particular, in Ashtarak community of Aragatsotn region, construction of a new lighting system in busy districts was carried out, the existing system was expanded, equipped and modernized. In Katnaghbyur community, the yard of the nursery-kindergarten has been improved, playground equipment has been purchased.The damaged parts of the internal drinking water network have been repaired in Katnaghbyur community.

By the decision of the Government, in the sidelines of the North-South Investment Program, the areas in the alienation zone of the Sisian-Kajaran new section of M2 Yerevan-Yeraskh-Goris-Meghri-border of the Islamic Republic of Iran (including the Bagrushat tunnel) will be recognized as overriding public interest.

By the decision of the Government, Seda Safaryan was nominated for the post of a judge of the Constitutional Court.