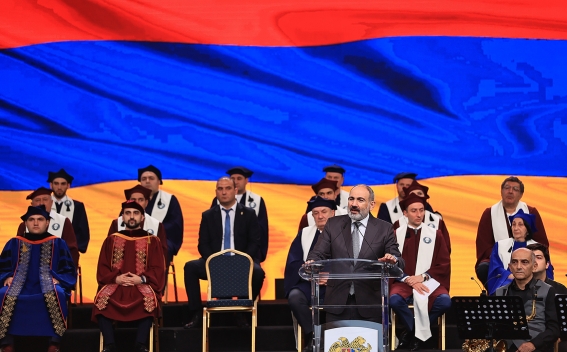 Minister of Education, Science, Culture and Sports of Armenia Vahram Dumanyan, Chairman of the Council of the National Polytechnic University of Armenia Tigran Avinyan, other high-ranking officials, trustees, university patrons, famous graduates, professorial staff, this year's graduates and their parents also participated in the solemn event.

The Prime Minister congratulated the attendees on the remarkable day and said, “We are in a university which, in fact, predetermined the face of today’s Armenia in the true sense of the word. What do I mean? When the process of industrialization began in the Second Republic of Armenia, every year thousands of engineers graduated from this university, who transformed and rebuilt Armenia every day. Most of what we have today, from the energy sector, to infrastructure, urban planning, communication, transport systems, was conceived inside these walls. This is very important to record."

Nikol Pashinyan emphasized the development of modern technology in the country. “A huge part of the problems in the history of the Third Republic is related to the technological gaps, or lagging behind modern technological demands and trends, which unfortunately we faced. I want and hope that in these new times, the National Polytechnic University of Armenia, or rather, its graduates, will rediscover the former function of making Armenia a more and more advanced technological country every day, which this university and our higher educational system in general once had. I think that we should see the National Polytechnic University of Armenia, our higer educational system in general from this perspective, that through our university system, Armenia will become more competitive in the field of technology in a very short period.

Our government has declared the roadmap of making Armenia a technological country, and this is extremely important. It is the most important mission of the graduates of the National Polytechnic University to overcome the potential fears that may still exist about technology, because we see that technology is coming to serve people, societies. In this age of technology, we see unexpected trends, when in the age of technology man tries to be closer and closer to nature, closer and closer to his origin and make more and more efforts to preserve and protect the environment, but on the other hand, use the environment for the benefit of people, society, state.

Dear graduates, I congratulate you and want to believe that you are leaving the university with the mission of making Armenia better every day, with the mission of making Armenia a continuously technologically developing and ultimately developed country. I want to wish you a path free of obstacles, success in carrying out this truly epoch-making mission.

I congratulate you, I congratulate your parents, your family members, your teachers, your lecturers, and the National Polytechnic University of Armenia, which has opened a way of life for you. Finally, I congratulate all of us that our country will receive such a new potential, new blood and new enthusiasm on the way to development," the Prime Minister said.