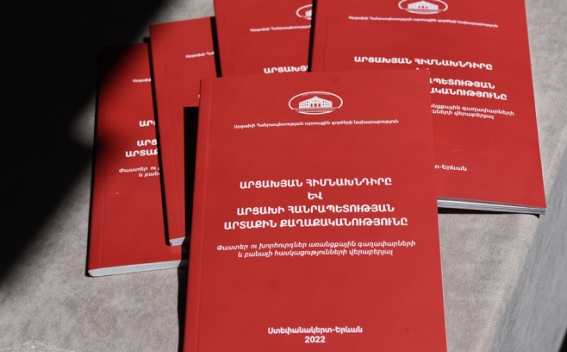 In his opening remarks, Foreign Minister of the Republic of Artsakh David Babayan noted that the work presents the general concept of Artsakh on the Republic’s foreign policy and the Azerbaijani-Karabagh conflict.

"The book is intended for representatives of the legislative and executive bodies, journalists, scientific and educational circles", said David Babayan.

The Foreign Minister also stressed that the book will be published in Russian, English, German, French and Spanish to make it accessible to a wider readership.

In his speech, Chairman of the National Assembly of the Republic of Artsakh Arthur Tovmasyan emphasized the importance of the initiative, noting that the handbook will be useful for young political scientists and in the future – also for members of the Youth Parliament to be formed.

Congratulating the staff of the Foreign Ministry on the publication of the book, State Minister of the Republic of Artsakh Artak Beglaryan stressed that the work will be useful for both statesmen and the novice researchers studying the causes and peculiarities of the Azerbaijani-Karabagh conflict.

"The book is important in terms of jointly advancing the position of Artsakh on the Azerbaijani-Karabagh conflict, coordinated by the Ministry of Foreign Affairs", emphasized Artak Beglaryan.

In his speech Head of the Central Information Department of the President's Office of the Republic of Artsakh Vahram Poghosyan highlighted the importance of publishing such a book in the context of the modern era of information wars.

Clergymen of the Artsakh Diocese of the Armenian Apostolic Church, representatives of state, public, scientific and educational circles, journalists were also present at the presentation.