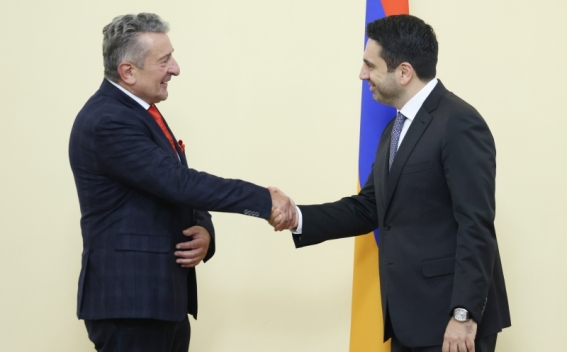 On July 14, the RA NA President Alen Simonyan received the delegation led by the President of the Landtag of Saxony-Anhalt of the Federal Republic of Germany Gunnar Schellenberger.

The stable development of friendly relations between Armenia and Germany and the deepening of inter-parliamentary cooperation were highly emphasized at the meeting. Reference was made to the already signed documents on cooperation between Armenia and Saxony-Anhalt. Alen Simonyan highly appreciated the existence of the Mesrop Center for Armenian studies at the Martin Luther University Halle-Wittenberg, asking for the support of the parliamentarians to ensure the continuity of activities of the Center. The German partners noted that the issues related to the Center are at the center of attention, presenting the work already done in the direction of its vital activity.

The sides referred to the ''Armenia Day'' event planned for November 17, 2022 in the Landtag, expressing confidence that it will strengthen Armenian-German cooperation. According to the representatives of the German side, this project is the first of its kind, and Armenia was chosen as a country with friendly and democratic values. ''It is common for us to say that we wake up early. This means that we are prompt and able to respond to all questions,'' Gunnar Schellenberger noted, referring to the further plans for prospective cooperation.

The sides discussed the issues related to lasting peace and security in the region, humanitarian issues following the 44-day war.