We Have One Mission: to Ensure the Safe, Prosperous Development and Independence of Armenia - Nikol Pashinyan 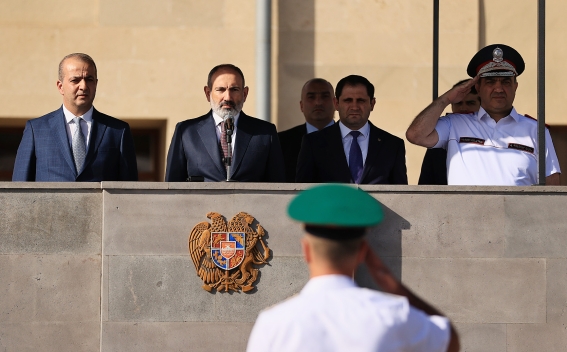 Prime Minister Pashinyan congratulated all the servicemen on the occasion of the 30th anniversary of the formation of the Border Guard Troops and noted, “In general, as in any country, the border guard troops in the Republic of Armenia are considered part of the Armed Forces. During the entire history of the Third Republic, the border guard troops contributed to the protection of the territorial integrity and security of the Republic of Armenia and together with the army fulfilled the tasks that were set before the army. But I want to emphasize that purely in terms of the idea, the concept, the border guard troops are generally the symbol of peace, because the borders, the protection of which is entrusted to the border guard troops, are usually considered peaceful borders. Because it is assumed that a friendship or peace treaty has been concluded with the states located in the direction of those borders, and this is a very important circumstance to record.

The border guard troops, in fact, since their formation, have not always and not everywhere acted according to the logic of this function. We bow our heads and pay our respects to the border guards who died protecting the Motherland. But I want to emphasize again that the logic of our policy is that we want all the borders of the Republic of Armenia, without exception, to be handed over to the control of the border guard troops, and the army units to return to their permanent locations. And this is exactly what we mean in the logic of the Armed Forces when we say peace agenda, this is exactly what we mean when we announce that the Armenian Government has adopted a peace agenda.

I am saying all this on this occasion to emphasize the direction and desire of our policy, but also to record that we still have a long way to go to achieve this goal, a very difficult and complicated way.

Unfortunately, the security challenges facing our country are not only unresolved, but remain concerning. All of us, first of all the country's political leadership, must work to ensure peace and stability along our country's borders.

Congratulations once again, thank you for your service”.

The Prime Minister presented state awards for the bravery and dedication shown in defending the borders of the Motherland. Captain Hrant Arzumanyan was posthumously awarded the Medal of Valor, Sergeant Karen Sargsyan was posthumously awarded the Medal for Combat Service. The Prime Minister handed over the awards to their relatives.

Prime Minister Pashinyan also laid flowers at the khachkar dedicated to the memory of border guards who fell for the Motherland, paying tribute to their memory.