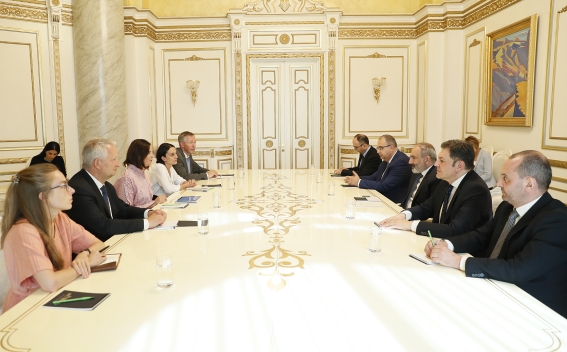 Prime Minister Nikol Pashinyan received Vice President of the Bundestag of the Federal Republic of Germany Katrin Göring-Eckardt and the delegation led by her.

Nikol Pashinyan emphasized the importance of bilateral relations, which recently have been dynamically developing at the level of Governments, parliaments and local self-governments. According to the Prime Minister, the Armenian-German partnership is based on political, economic and value system interests. "Armenia as a country that shifted to parliamentary system of government in 2018, is interested in exchanging experience with Germany, which has firm traditions of parliamentarianism. The FRG is the largest trade and economic partner of Armenia in the EU. We attach importance to the joint economic programs, as well as the support for Armenia's democratic agenda," Prime Minister Pashinyan said.

The Vice President of the Bundestag thanked the Prime Minister of Armenia for appreciation and congratulated him on receiving the vote of the Armenian citizens for the implementation of democratic reforms. Katrin Göring-Eckardt emphasized that democracy and parliamentarism contribute to security, stability and development, and Germany is interested in strengthening the political dialogue with Armenia, implementing programs in various sectors of the economy: information technology, renewable energy, etc.

The interlocutors exchanged ideas on the situation and security challenges in the South Caucasus region. The Vice President of the Bundestag noted that Germany attaches importance to regional peace and supports Armenia's steps in that direction. The sides highlighted joint efforts aimed at preserving Christian cultural heritage.

Issues of mutual interest were discussed in the context of the Armenia-FRG economic agenda. Projects in the fields of solar energy and technology were considered promising. In this context, the willingness to continue cooperation was reaffirmed.

Nikol Pashinyan and Katrin Göring-Eckardt noted the importance of the Eastern Partnership format in the development of Armenian-German relations.