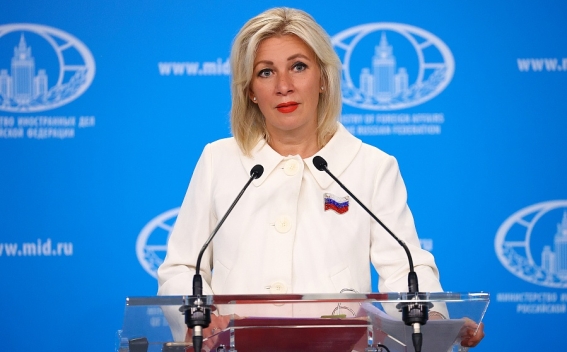 She noted that Special Representative of the Russian Foreign Ministry Igor Khovaev holds regular consultations with the parties to find points of contact, to reach mutually acceptable basic principles, parameters of the peace agreement.

"Delimitation of the Armenian-Azerbaijani border is also an important direction of Russian mediation efforts to improve the dialogue between our Transcaucasian neighbors. Moscow's consultative role in this process is fixed in the Sochi trilateral statement at the highest level of November 26, 2021. As you know, at the end of May a relevant bilateral commission was established and the first exploratory meeting of representatives of Armenia and Azerbaijan was held on the border between the two countries. For our part, we are always ready to host our Armenian and Azerbaijani friends in Russia. We are confident that Russia's unique, professional capabilities to delimit demarcation in the post-Soviet space can significantly strengthen security on the Armenian-Azerbaijani border and in the region as a whole.

We proceed from the fact that the specific timing of certain events will be determined by Yerevan and Baku," she noted.