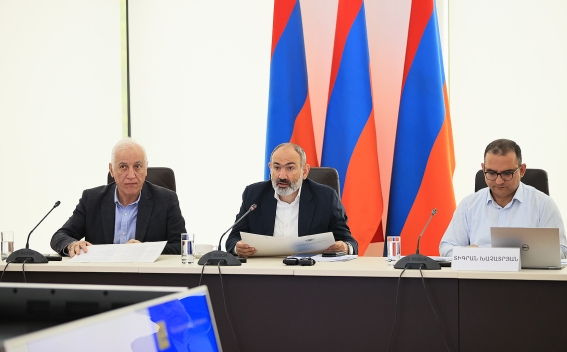 Chaired by Prime Minister Nikol Pashinyan, the work of the session of the Economic Policy Council under the Prime Minister of the Republic of Armenia started today, which will last from August 6-7, at the Dilijan educational and research center of the Central Bank of Armenia.

The meeting is attended by President Vahagn Khachaturyan, Minister of Economy Vahan Kerobyan, Minister of Finance Tigran Khachatryan, Chairman of the Board of Trustees of "Center for Economic Perspectives” Foundation Artur Javadyan, Minister of Industry and Agro-Industrial Complex of the Eurasian Economic Commission Artak Kamalyan, Chairman of "Armenian Economic Union" non-governmental organization Gurgen Aslanyan, member of the European Economic Research Center Zareh Asatryan, professor Levon Barseghyan of Cornell University, USA, professor Ruben Enikolopov of the New Economic School in Moscow, professor Vladimir Asriyan of the Barcelona School of Economics, representatives of the National Assembly Standing Committees on Financial-Credit and Budgetary Affairs, as well as Economic Affairs, the Deputy Ministers of Economy, Finance and High-tech Industry, Head of the Dilijan Research Center of the Central Bank Armen Nurbekyan, other officials.

First of all, I want to welcome our experts, the members of the Economic Council under the Prime Minister, and thank them for agreeing to work in this format. In this hall, we have discussed many possible economic directions and developments in Armenia in various formats, and some of these discussions have already come to life.

I remember when we were discussing here in 2018 about having a flat income tax, and it was a very serious debate, there were a lot of doubts, opinions for and against. In the end, a political decision was made that we should go that way and introduce a flat income tax, reaching 20 percent in a few years. Back then, we had two expectations from that decision. first, we expected jobs to come out of the shadow, and second, we would have more tax revenue at a lower rate of income tax. Those predictions, in fact, have come true today. we have continued growth in paid and registered jobs, in terms of income tax, we are collecting more taxes at a lower rate, and this process is continuous. This is just one example.

Why am I saying this? To be honest, I am very satisfied that we made that decision, because the political leadership, or at least I, not being economist by profession, listen to economists and try to come to a conclusion, of course, in the format of the Government, in cooperation with the parliamentary majority. I hope that after some time we will remember the decisions made as a result of such a discussion, with which we will express satisfaction. I welcome everyone again and thank you for your participation."

Within the framework of the session's agenda, issues related to economic policy of Armenia, current situation and forecasted developments are the subject of discussion. The Government Action Plan, macroeconomic developments, monetary and fiscal policy, improvement the competitiveness of agriculture, development of the food system, and other topics are planned to be discussed.

Minister of Finance Tigran Khachatryan, Minister of Economy Vahan Kerobyan and Head of the Dilijan Research Center of the Central Bank Armen Nurbekyan made reports. In his report, the Minister of Finance referred to the 2017-2021 economic developments, fiscal policy priorities for ensuring high economic growth in the medium term, macroeconomic indicators expected by the Government's Action Plan, current and capital expenditures and a number of other issues. The Minister of Economy presented a summary report on the implementation of the economic plan of the Government, the effect of the exchange rate on the economy and exports. In his report, the Head of the Dilijan Research Center of the Central Bank referred to the monetary policy, inflation and currency developments, uncertainties due to the pandemic and war and forecasts.

The participants of the session expressed their observations, an exchange of ideas took place on the issues raised in the reports, economic trends and development prospects. Reference was also made to the economic challenges caused by the international situation.

The Prime Minister noted that the priority goal of the Government is the development of human capital, and for this purpose, radical reforms are being implemented in the field of education. In this context, reference was made to the Government's programs aimed at increasing the productivity of the economy and creating knowledge-based economy.

The work of the session of the Economic Council under the Prime Minister will continue on August 7.