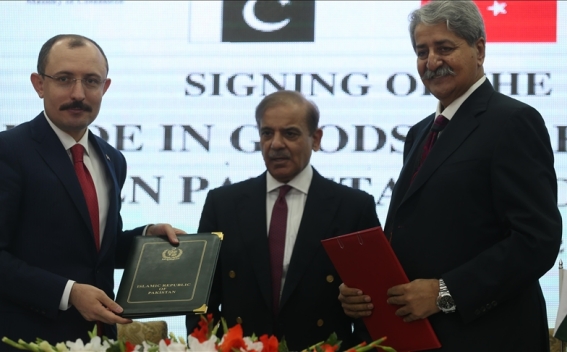 Türkiye and Pakistan on Friday signed a trade agreement aimed to achieve the objective of pushing bilateral trade up to $5 billion, anews reports.

The signing ceremony was held in Pakistan's capital Islamabad and was attended by Prime Minister Shehbaz Sharif and other senior officials.

Last month, Pakistan's Cabinet approved the trade deal agreed upon by the two countries during Sharif's visit to Ankara in June.

Under the deal, Türkiye will provide concessions to Pakistan on 261 tariff lines, including immediate zero rating on 123 items.

Islamabad, in turn, will extend concessions on 130 tariff lines to Türkiye.

Speaking at the ceremony, Sharif called the signing of the deal a "milestone in the historical and brotherly relations" between Islamabad and Ankara.

"Today we have signed Trade in Goods Agreement, which will open many opportunities between our two great brotherly countries," he said.

"Our capacity is beyond anybody's imagination and our commitment is outstanding. Therefore, signing of this … agreement would lead to achieving much higher heights in terms of enhanced trade and investment between our two countries," he added.

During his visit to Ankara, Sharif termed Pakistan's trade with Türkiye "insufficient," while Turkish President Recep Tayyip Erdoğan confirmed that the two sides have set a target of raising bilateral trade to $5 billion in the next three years.