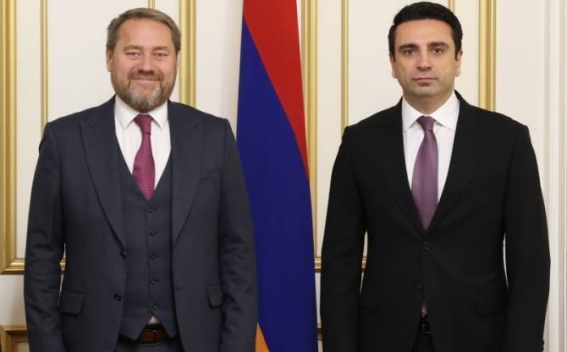 During the meeting details relating to the latest Azerbaijani attack on Armenia, including the ceasefire violations, the shelling of Armenian positions, the losses, were discussed. The sides also discussed the agreement on the ceasefire, expressing hope that it will be lasting.

"The military-political leadership of Azerbaijan is trying to achieve its maximalist goals by force and ignores the efforts of the Armenian side aimed at establishing peace in the region", the Speaker said, reminding that the Armenian authorities have applied to the international community presenting the current situation.

Alen Simonyan also called on international partners and allies to give a clear and addressed response to the Azerbaijani actions and take effective steps to support the efforts of Armenia aimed at preventing similar incidents in the future.

Issues relating to the Armenian-Russian parliamentary partnership were also discussed during the meeting. Alexander Belsky presented the agenda of the meetings to be held during their visit in Armenia, stating that the Yerevan City Council and the Legislative Assembly of St. Petersburg have signed a Memorandum of Understanding which will enable to outline new vectors of productive and constructive mutual partnership.