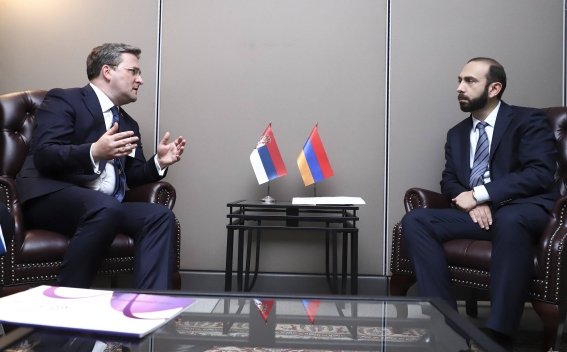 Minister Mirzoyan presented to his counterpart the details of the situation resulting from the Azerbaijani aggression unleashed on September 13, referring to the cases of violation of international and humanitarian law by Azerbaijan and underlining the inadmissibility of the threat or use of force and policy of coercion. The need for targeted response and effective steps of the international community was also emphasized in terms of countering Azerbaijan's non-constructive approaches.

Ararat Mirzoyan and Nikola Selaković commended the positive dynamics of the political dialogue between the two countries and emphasized the importance of joint efforts towards expanding the bilateral agenda.

The counterparts also touched upon the topics related to cooperation on international platforms, and exchanged views on a number of issues of regional and international importance.

During the meeting, issues on the process of normalization of Armenia-Turkey relations were also discussed.