The meeting of Ararat Mirzoyan and Marija Pejčinović Burić 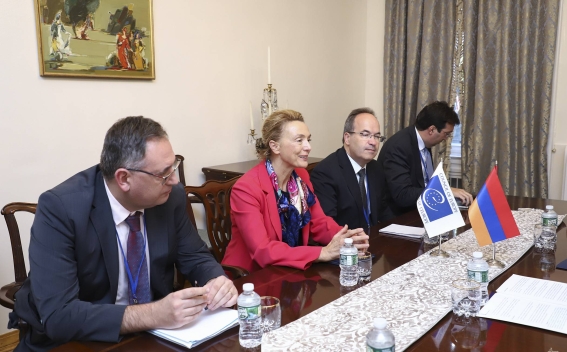 On September 21, on the margins of the 77th session of the UN General Assembly, Minister of Foreign Affairs of Armenia Ararat Mirzoyan met with the Secretary General of the Council of Europe, Marija Pejčinović Burić.

Ararat Mirzoyan briefed his counterpart on the details of the aggression unleashed by Azerbaijan against the sovereign territory of the Republic of Armenia, considering unacceptable the cases of deliberate targeting of the civilian population and infrastructure, inhumane treatment and torture of Armenian servicemen and prisoners of war by the Azerbaijani armed forces.

The Minister of Foreign Affairs of Armenia noted that such actions of Azerbaijan are a blatant disregard of the fundamental norms of international law and the obligations undertaken by the member states within the framework of the Council of Europe and should have appropriate consequences.

The Armenian side emphasized the necessity of preserving the territorial integrity of the Republic of Armenia, the return of the Azerbaijani troops to their initial positions, the immediate repatriation of the Armenian prisoners of war, as well as the restoration of stability and peace in the region.

Ararat Mirzoyan highlighted the importance of ensuring uninterrupted access of international organizations to Nagorno-Karabakh. The Minister also expressed hope that the Council of Europe will be more firm and consistent in protecting the fundamental rights of the people of Artsakh.

Both sides emphasized the continuous reform process implemented in Armenia within the framework of Armenia-CoE cooperation.