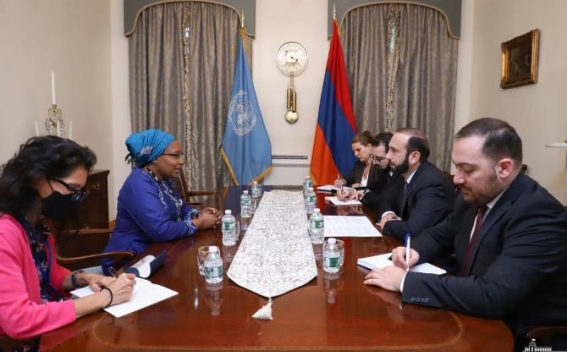 On September 21, within the framework of the 77th session of the UN General Assembly, Minister of Foreign Affairs of Armenia Ararat Mirzoyan had a meeting in New York with Alice Wairimu Nderitu, the Special Advisor of the UN Secretary-General on Genocide Prevention.

Ararat Mirzoyan and Alice Wairimu Nderitu commended the close cooperation with regards to the promotion of the genocide prevention agenda and the fight against xenophobia and discrimination. Minister Mirzoyan emphasized the importance of the special adviser's mandate and expressed readiness to continue effective cooperation under it.

The interlocutors exchanged views on the role of high technologies in the prevention of genocides and crimes against humanity.

Touching upon the situation resulting from the military aggression unleashed by the Azerbaijani armed forces against the sovereign territory of Armenia, Minister Mirzoyan drew the interlocutor's attention to the continuous gross violations of international and humanitarian law by Azerbaijan. The Minister stressed the importance of the international community's targeted response to these crimes and the strengthening of prevention mechanisms.