We Call on Azerbaijan to Return the Troops to their Initial Positions: US Embassy to Armenia 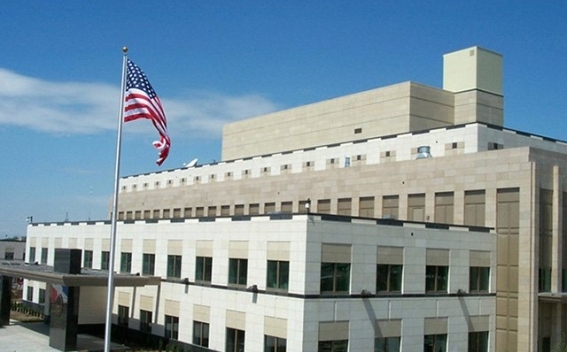 The US Embassy to Armenia answered the inquiry of ‘Lurer’ regarding the recent aggression of Azerbaijan.

To the question, “how do you assess Azerbaijan's actions towards the sovereign territory of Armenia?” the US Embassy to Armenia answered: “There can be no military solution to the conflict, and the use of force is not acceptable.  We mourn the loss of life, including reports of multiple civilian deaths inside Armenia.  We are glad that our continued engagement at high levels with Azerbaijan and Armenia has helped the sides reach a ceasefire, and we continue to engage on and encourage the work needed to reach a lasting peace.”

‘Lurer’ was interested “What is the US diplomatic mission’s position regarding the Armed Forces of Azerbaijan illegally located in the sovereign territory of Armenia? Do you consider their withdrawal from the internationally recognized territory of Armenia an urgent necessity? The US Embassy stated, “We call on Azerbaijan to return troops to their initial positions.  We urge that the cessation of hostilities and disengagement of military forces be maintained, and work to resolve all outstanding issues between Armenia and Azerbaijan through peaceful negotiations continue.  The United States is prepared to do whatever it can to support these efforts.”

To the question “What is your position regarding Azerbaijan's targeting of civilian settlements and infrastructure in the territory of Armenia, as a result of which there are also victims?”, the Embassy answered, “We have observed first-hand damage to civilian infrastructure inside Armenia and have seen reports of Armenian civilian casualties, both of which are deeply concerning and underscore the need to prevent further hostilities and the importance of diplomatic engagement.”

“What is your position regarding Azerbaijan's capture of Armenian servicemen in the sovereign territory of Armenia, reports of torture against them, as well as non-return of them to the Armenian side?” ‘Lurer’ asked. The answer was, “We have seen reports of capture of Armenian servicemembers and reports of torture.  The immediate, unconditional return of those captured in last week’s attacks, as well as the return of all other detainees, is an important step to achieving a lasting peace.  The United States condemns torture wherever and whenever it occurs and strongly urges governments to abide by their international obligations and end impunity for these crimes.”