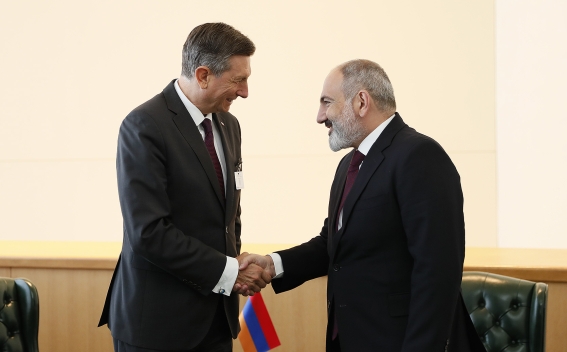 Prime Minister Nikol Pashinyan met with the President of Slovenia Borut Pahor in New York in the sidelines of the 77th session of the UN General Assembly.

The Prime Minister referred to the large-scale aggression unleashed by Azerbaijan against the sovereign territory of Armenia on September 13. Nikol Pashinyan emphasized the fact that the armed forces of Azerbaijan targeted 36 settlements of the Republic of Armenia, as a result of which the Armenian side has victims and wounded, including among civilians. Nikol Pashinyan emphasized the importance of the international community's condemnation of the Azerbaijani actions, adequate reaction in the direction of the immediate withdrawal of the Azerbaijani units from the sovereign territory of the Republic of Armenia.

The President of Slovenia expressed concern regarding the events that took place and emphasized the need for the settlement of regional problems through negotiations.

At the meeting, the sides exchanged ideas on the further development of Armenian-Slovenian relations, as well as on various issues of mutual interest.