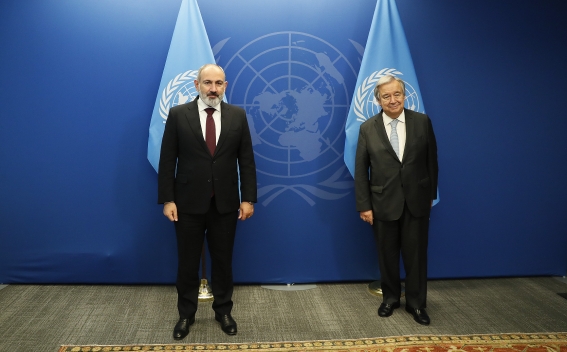 The Prime Minister referred to the large-scale aggression unleashed by Azerbaijan against the sovereign territory of Armenia and its consequences. The Head of the Government attached importance to the discussions held in the UN Security Council based on Armenia's application and the expression of clear and targeted positions by the UN Security Council members regarding Azerbaijani aggression.

Nikol Pashinyan emphasized the importance of the international community's adequate response about the need for immediate withdrawal of Azerbaijani units from the sovereign territory of the Republic of Armenia and the need for consistent and continuous attention to prevent new aggressions by Azerbaijan. The Head of the Government also referred to gross violations of international humanitarian law by Azerbaijan and the facts of targeting the civilian population and infrastructure.

António Guterres expressed concerns regarding the maintenance of tension on the Armenian-Azerbaijani border and emphasized the importance of settling regional problems through peaceful negotiations.