In a Meeting with Charles Michel, Nikol Pashinyan Emphasizes the Need for Addressed Assessments Over Azerbaijani Aggression 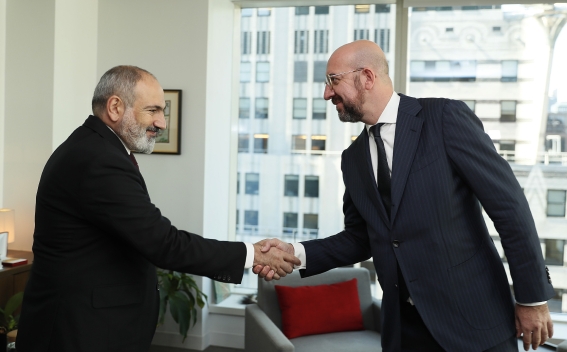 Prime Minister Nikol Pashinyan had a meeting with the President of the European Council Charles Michel in New York.

The Prime Minister referred to the large-scale aggression unleashed by Azerbaijan against the sovereign territory of Armenia, as a result of which the sovereign territories of the Republic of Armenia were occupied. The Head of the Government emphasized the need for clear and addressed assessments of the international community, including the European Union, regarding the Azerbaijani aggression and the need for immediate withdrawal of the Azerbaijani units from the sovereign territory of the Republic of Armenia. The Head of the Government also referred to the cases of gross violation of international humanitarian law by Azerbaijan and the facts of targeting the civilian population and infrastructure.

Charles Michel expressed concern regarding the maintenance of tension on the Armenian-Azerbaijani border and emphasized the importance of the settlement of regional problems through peaceful negotiations. The President of the European Council reaffirmed his willingness to promote dialogue and peace.