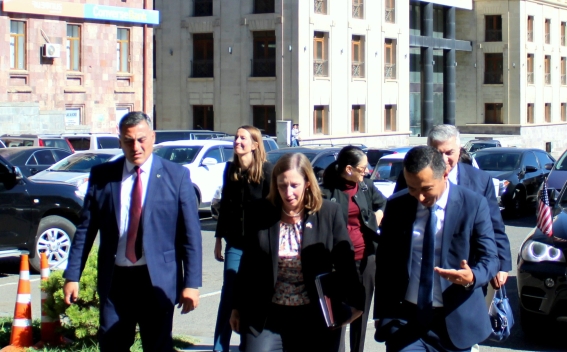 The ambassador, mentioning that Tuesday is the second anniversary of the start of the 44-day war, conveyed her respects to its casualties, extended condolences to their families, and stated that, unfortunately, the war of the last days also took the lives of young men.

Governor Ghukasyan, for his part, presented the details of Azerbaijan's invasion of Syunik on September 13.

Ambassador Tracy said that this conflict is at the focus of the US, even as there are parallel conflicts in the wider region.

She noted that they are doing everything, both at the highest levels and through diplomatic channels, to prevent the use of force, to ensure the continuity of negotiations, and to have a prospect of settlement of the problem that will bring long-term and stable peace.

The high-ranking diplomat noted that she realizes how difficult it is now for the residents of Syunik, as well as of the other border provinces, to have a sense of security, and that is why she visited the province with her colleagues to find out what is happening and decide what they can help with.

Since Ambassador Tracy is concluding her diplomatic mission in Armenia, at the end of the meeting she noted that the situation in Syunik—and in Armenia, in general—will always be in her mind, and if there is something she can do to help establish peace here, she will do it in the future, too—and no matter where she may be.