Candidate for SJC member Karen Andreasyan: the fair Court has always been my dream, and this is an opportunity, eventually, to approach really my dream 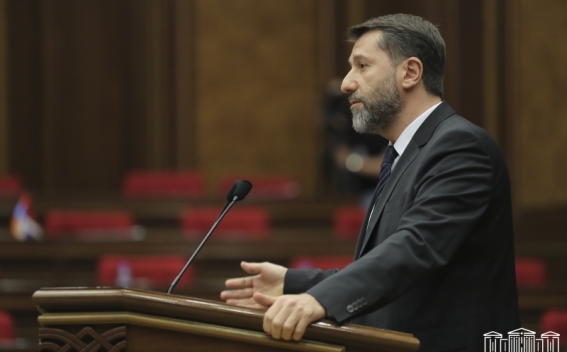 It is a great honour for me to be nominated for the position of the member of Supreme Judicial Council (SJC): the candidate for the SJC member Karen Andreasyan noted in his speech. He underlined that in case of positive voting he will assume that position with great joy.

On October 6, on the initiative of the deputies of the National Assembly extraordinary sitting was convened: the agenda item is the election of the two members of the SJC.

The Chair of the NA Standing Committee on State and Legal Affairs Vladimir Vardanyan presented the candidate’s biographical data and the professional path.

According to Karen Ancreasyan, people became tired of hearing for 30 years that soon the courts will not be as they have been for decades. “They are tired of my words, because I speak about this for almost 20 years. I don’t say that little has been done in order we’ll have the courts of our dream, but, unfortunately, the current political power has claimed many times that those results, which have been done in the judicial system, are not sufficient. I have tried to promote the judicial system, the courts to be good – as a lecturer, as an advocate, as a Human Rights Defender, as a businessman, as an NGO representative, as a representative of an international organization and in the end – as a Minister,” the candidate underscored.

He informed that his all attempts had partial success, mostly also failures. The candidate promised that in case of vote of confidence, to be one of the SJC members to act fair, and that is, according to him, sufficient to do more for the system, that in all enumerated positions and circumstances. “The fair court has always been my dream, and this is an opportunity, eventually, to approach really my dream,” the candidate for the SJC member Karen Andreasyan concluded his speech.

The deputy Hasmik Hakobyan asked the candidate to comment the news being circulated in the press, according to which, Karen Andreasyan cannot be an SJC member because of being an owner of a private company.

The candidate, addressing the journalists, asked them before any publication to at least specify the information, which is open, then he added that he has never been the shareholder of the legal company, about which it is written in the press. He added that in that company his wife has a share, which is not an obstacle for being a candidate for the SJC member.

The Chair of the NA Standing Committee on Financial-Credit and Budgetary Affairs Gevorg Papoyan was interested in the primary programmes, which will be immediately brought into life. Karen Andreasyan, answering the question, noted that the SJC member has one thing to do – to vote fairly. Regarding the system, he noted that there are lots of things to say and to do – from the overloading of the courts up to groupings of judges, who try to keep own and not own logic.

The Deputy Chair of the Standing Committee on Economic Affairs Babken Tunyan inquired the candidate if his goals and things to do that he had as a Minister of Justice will not suffer in case of becoming SJC member, then added if the justice system will more win or suffer.

Karen Andreasyan became sincere that after receiving the proposal of becoming a candidate of the SJC member he also had that inner struggle. He underlined that the temptation to choose continuing the numerous programmes, being important from each other for the whole justice system, or to go to the SJC and focus especially on the courts had been great. The candidate repeated that sometimes more can be changes with one fair vote in the whole judicial system.