MOD: Armenia women to undergo military training if they wish 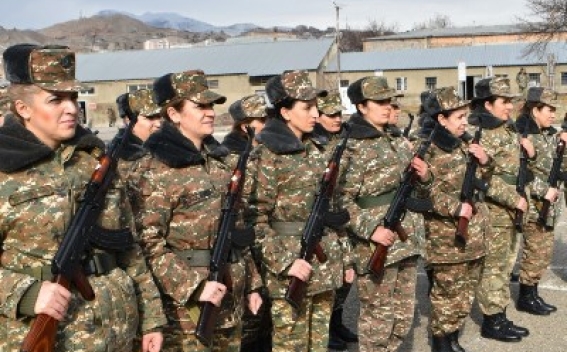 Defense Minister Suren Papikyan announced, at Thursday’s Cabinet session of the government, that women often write letters to the Ministry of Defense (MOD) of the Republic of Armenia (RA), and raise the matter of their undergoing military training also, NEWS.am reports.

"We already have a developed program. The MOD will soon make an announcement that female RA citizens can register and undergo combat weapon firing training at the corresponding shooting ranges. Of course, this is optional, the number of hours, outfit, everything will be clarified," he said.

Prime Minister Nikol Pashinyan, for his part, said: "Let's record that if we say ‘all’ RA citizens, women are also among those ‘all.’ I believe familiarity with weapons wouldn't hurt anyone. It is also knowledge that will not harm anyone."

The government on Thursday approved a legislative package which envisages that the salaries of Armenia’s contract soldiers will double if they undergo a voluntary certification. The servicemen who have not undergone this certification can undergo it twice a year. And if they do not undergo this certification, a new contract will not be signed with them once their current contract expires.