The Russian proposals mostly meet the minimum standards that allow to ensure the security of Artsakh: Arayik Haroutyunyan 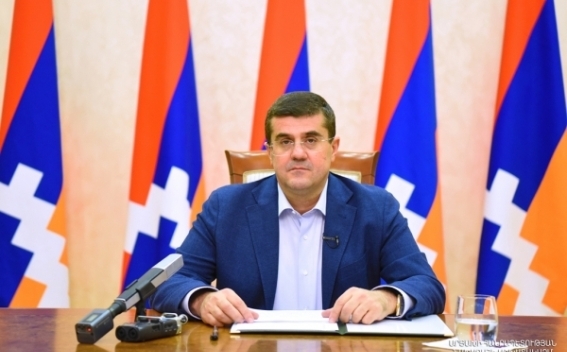 In recent days, the attention of all Armenians, without exaggeration, is riveted on the negotiations between Armenia and Azerbaijan. A number of power centres submitted proposals to the authorities of Armenia and Azerbaijan on the key issues regarding the settlement. Artsakh President Arayik Haroutyunyan wrote this on Facebook
"The proposed principles and approaches, in case of their acceptance and realisation, will have a crucial importance for both the Republic of Artsakh and its people, and for Armenia and other countries of the region.
That’s why we have no right to make mistakes as any of them may become fatal. We are confident that those proposals and principles that deny the right of people of Artsakh to self-determination, deprive of the prospects of fair settlement of the conflict and bring into a question the existence of Artsakh should be rejected once and forever. This stems not only from the interests of the Republic of Artsakh, but also from those of the entire Armenian people, as the Republic of Armenia and the Republic of Artsakh together form a single homeland and inseparable set of values and interests.
We welcome the statement of the Prime Minister of Armenia stating that Armenia agreed to work towards the establishment of interstate relations between Armenia and Azerbaijan in early September of the current year, based on the principles and parameters presented by Russia, and is ready to reaffirm this at the high-level meeting to be held in Sochi on October 31.
Of course, as a result of the negotiation process, we would like to achieve a fair and final settlement of the Karabakh conflict and international recognition of the independent status of the Republic of Artsakh. However, taking into account the existing challenges and limited possibilities, in our opinion, the Russian proposals mostly meet the minimum standards that allow to ensure the security of Artsakh and do not throw into question its future.
We voice hope that as a result of the tripartite summit to be held on October 31, it will be possible to ensure the elements related to the fate of Artsakh. First of all, we are talking about the untimely extension of the mission of the Russian peacekeeping troops deployed in Artsakh. Their presence in Artsakh is of vital importance, because since November 2020, Russian peacekeepers bear the main responsibility for the security of the Republic of Artsakh and its people. The second key parameter is the maintenance of at least the current status of Artsakh.
The statement of the President of the Russian Federation during the meeting of the "Valdai" International Club inspires certain hopes that these goals are completely achievable.
We anticipate that the vital interests of the Artsakh Republic and, first of all, the inalienable right of the Artsakh people to self-determination will be fully protected during the upcoming negotiations. International recognition of the right of the people of Artsakh to self-determination and the results of the realization of that right has no alternative.
We are confident that with joint efforts we will succeed in preventing the legitimization of the consequences of the illegal use of force by Azerbaijan and its allies against the Republic of Artsakh, thus ensuring conditions for a safe and prosperous future of our homeland and people," Haroutyunyan added.
Հայերեն На русском