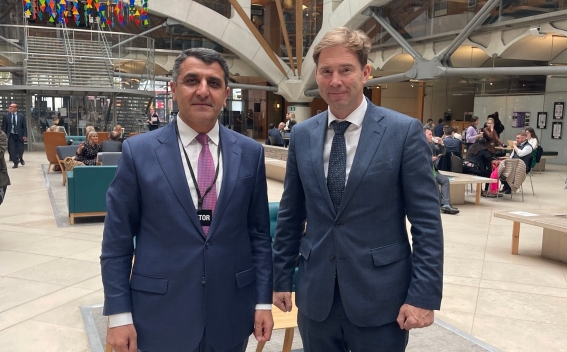 The Ambassador of Armenia to the UK, Varuzhan Nersesyan, on Tuesday met with Tobias Ellwood, the Chair of the Defense Select Committee of the UK House of Commons.

During the meeting, Ambassador Nersesyan presented the security challenges in Armenia’s region, noting the impact of the recent large-scale military attack of Azerbaijan on the sovereign territory of Armenia and the need for the immediate withdrawal of the armed forces of Azerbaijan from the internationally recognized borders of Armenia.

Also, the ambassador emphasized Azerbaijan's continued use of keeping Armenian prisoners of war (POWs) as hostages, thus violating the trilateral statement of November 9, 2020. In addition, the ambassador drew his interlocutor's attention to Azerbaijan's inhuman treatment of Armenian POWs, noting the latest example of extrajudicial killing of unarmed soldiers.

In addition, Ambassador Nersesyan briefed MP Ellwood on the efforts of the Armenian government to establish comprehensive peace in the region, and emphasized the need to settle the Nagorno-Karabakh conflict through existing international mechanisms.

The parties exchanged views also on the future of Armenia-UK relations and discussed the avenues for further development of their parliamentary cooperation on international platforms.