We are devoted to the Peace Agenda: Alen Simonyan 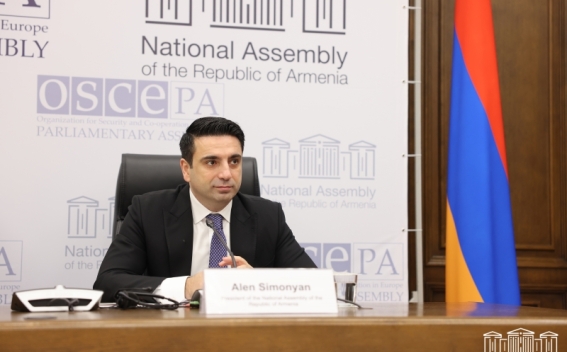 On November 13, the RA NA President Alen Simonyan gave a welcome speech at the meeting of the OSCE PA young parliamentarians.

Addressing the attendees, the NA President noted that the youth was the driving force of the Velvet revolution in 2018, who raised their voice for democratic values.

“After the revolution the democratic values are considered to be our main priority: they already speak about Armenian democracy in the world,” the RA NA President underlined.

Speaking about the youth engagement, Alen Simonyan noted that on the parliamentarians’ scale low than 30 years of the Inter-Parliamentary Union Armenia is on the second place. The RA NA President highlighted the parliamentary diplomacy, including the OSCE Parliamentary Assembly as a platform for strengthening the confidence in the OSCE region.

Touching upon the new phase of the large-scale aggression of the Azerbaijani armed forces against the sovereign territory of Armenia on September 13, Alen Simonyan mentioned: “We are genuinely and sincerely devoted to the peace agenda, which is a guarantee for the peaceful development and coexistence of the Republic of Armenia and the region.”

The RA NA President answered the young parliamentarians’ questions, which, particularly, referred to the reinforcement of the freedom of speech, the solution of the security problems and the democratic agenda items.