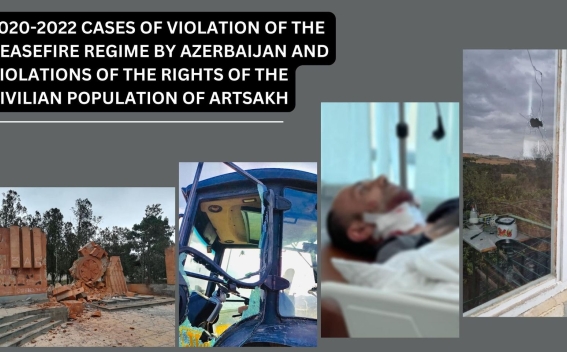 Artsakh’s Human Rights Defender Gegham Stepanyan issued a statement on ceasefire violations by Azerbaijan and violations of the rights of Artsakh civilians in 2020-2022. The statement reads:

''Following the Trilateral statement on November 9, 2020, the Azerbaijani side resorted to criminal actions leading to violations of the rights of the people of Artsakh about which the Staff of the Human Rights Defender regularly made statements.

Over the past two years, hundreds of illegal and blatant cases of violation of the international humanitarian law have been recorded, including violation of the ceasefire regime, psychological terrorism, disruption of the normal operation of infrastructures, obstruction of agricultural work, vandalism of cultural property and other cases, which led to the violation of the rights to life, physical and mental integrity, property, free movement, personal and family life, cultural and religious rights, the right to inviolability of dignity, torture, inhuman or degrading treatment, violations of the prohibition of discrimination.

• In the period between November 10, 2020 and November 13, 2022, 121 cases of crime leading to material and human damage were recorded by the law enforcement bodies of Artsakh.

• 5 of 8 persons who accidently appeared in the territories under the control of Azerbaijan were returned with obvious traces of violence, torture and fractures. Among the mentioned persons, a resident of the Martuni region Artak Manasyan, born in 1989, died just a few months later.

• 13 residential buildings were targeted, 8 agricultural machines, 22 vehicles, 16 other objects were damaged or destroyed, 5 gardens were burnt, small and large cattle were seized from the civilian population. Animals accidently passed to the pastures under the control of Azerbaijan are not returned but seized and used by the representatives of the Azerbaijani armed forces.

• Agricultural work carried out in the territories located near the contact line is obviously obstructed. Targeted shots are fired in the direction of the civilians engaged in agriculture work and agricultural machines after which the work stops. Such criminal actions by the Azerbaijani side are intensified especially during the agricultural season and harvest. The Azerbaijani military sometime enter immediately the gardens and under the threat of using weapons, force the participants of the harvest to leave the place. As a result of such behavior, Aram Tepnants from Martakert region, engaged in agriculture, and Seyran Sargsyan from Martuni region, engaged in cattle breeding were killed.

• With the aim to exert pressure, the work of vital infrastructures is periodically disrupted which was recorded in March, 2022 when the entire population of Artsakh was deprived of gas supply and heating for about 20 days, following the explosion of a gas pipeline by Azerbaijan.

• Contrary to the appeals and statements of various international structures, as a result of monitoring of open sources, after the establishment of ceasefire, more than a hundred cases of vandalism, destruction and desecration of Armenian religious and cultural values, graves in the territories under the Azerbaijani control have been recorded.

• The policy of Armenophobia continues at the state level in Azerbaijan. Hate propaganda is carried with the direct participation of the President of Azerbaijan, the ruling power and persons with public influence. The so-called method of “patriotic” education based on hatred of Armenians continues to be used in the Azerbaijani kindergartens and schools.

All these actions serve as actual proof of the policy of ethnic cleansing and genocide pursued by Azerbaijan towards the people of Artsakh. They are more eloquent than the false pacifism and fake promises of the Azerbaijani leadership.''