Alen Simonyan is On a Two-Day Visit in Georgia: We are Interested in the Establishment of Strategic Partnership with Georgia 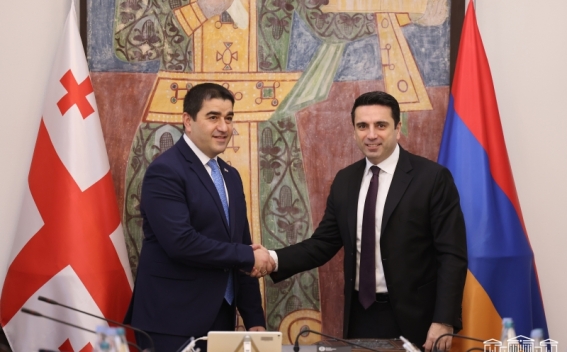 At the invitation of the Speaker of the Georgian Parliament Shalva Papuashvili the delegation led by the RA NA President Alen Simonyan is on an official two-day visit in Georgia.

After the tête-à-tête talk with the Speaker of the Georgian Parliament Shalva Papuashvili a meeting in extended format took place, during which the colleagues exchanged ideas on the agenda priorities.

The RA NA President thanked his colleague for the invitation and warm reception. “We especially highlight our relations with Georgia, and it is not accidental that the development of good neighbourly relations with Georgia is a priority in the Action Plan of the Government of Armenia for 2021-2026. We are interested in the establishment of strategic partnership with Georgai,” Alen Simonyan noted.

Shalva Papuashvili expressed confidence that the strengthening of continuous dialogue and cooperation between the two countries is an additional impetus for the regional security and stability.

Speaking about the inter-parliamentary relations, the sides touched upon the importance of Memoranda on Cooperation to be signed between the Standing Committees on Foreign Relations and Culture of Parliaments within the framework of the visit.

The role of the Parliamentary Groups functioning in two parliaments was also underlined, stressing the fact of them being led by the Deputy Speakers of Parliaments. The RA NA Speaker noticed that the platform of the educational-cultural cooperation is a good impetus for the possibilities of the development of the Centre of Armenian Studies in the higher educational institutions of Georgia or the Chair of the Georgian Language in the higher educational institutions of Armenia.

The parties discussed issues regarding the regional security. Alen Simonyan noted that Armenia is interested in the strengthening of regional security and stability. He added that the high level of relations between Armenia and Georgia is one of the important factors of ensuring security in the South Caucasus and highly appreciated the interest of the Georgian side in preservation of peace and stability in the region.

At the meeting a reference was made to the invasion of the Azerbaijani armed forces to the sovereign territory of Armenia and its aftermath.

The sides discussed working issues regarding the Armenian community of Georgia and the upcoming joint projects.