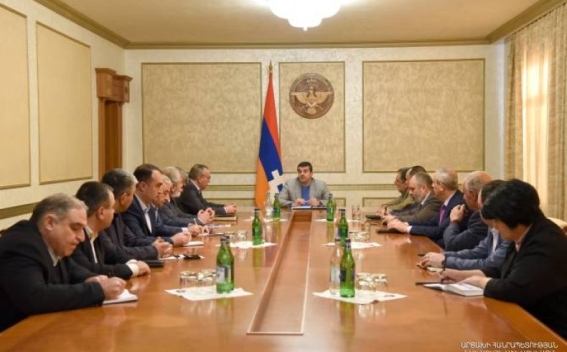 On November 19, President of the Artsakh Republic (Nagorno Karabakh) Arayik Harutyunyan convened an extended working consultation with the participation of representatives of the parliamentary political forces, Harutyunyan’s office said in a press release.

Recent foreign political developments around the Artsakh Republic, aggressive behaviour shown towards the civil population of Artsakh by Azerbaijan were on the discussion agenda. The participants expressed their concerns about the current military-political situation, exchanged views on the steps to be taken by the authorities.
Speaker of Parliament Arthur Tovmasyan, State Minister Ruben Vardanyan, Head of the Office of the President Karen Shahramanyan, Secretary of the Security Council Vitali Balasanyan, Foreign Minister David Babayan and other officials partook in the consultation.
Հայերեն На русском